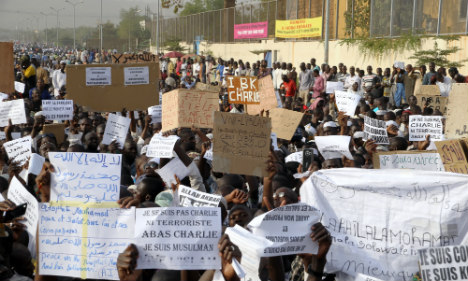 A demonstrator in Bamako holds a sign reading "I am not Charlie or a terrorist, down with Charlie, I am Muslim", Photo: Habibou Kouyate/AFP

Four people were killed and 45 injured in protests in Niger's second city of Zinder that turned violent with demonstrators ransacking three churches and torching the French cultural centre.

A doctor in the city's hospital told AFP that all of the dead and three of the injured had gunshot wounds.

"We've never seen that in living memory in Zinder," a local administration official said. "It's a black Friday."

There was also bloodshed in Karachi, Pakistan, where three people were injured when protesters clashed with police outside the French consulate, officials said. Among them was an AFP photographer, who was shot in the back.

Washington condemned the violence, stressing the "universal" right of the press to freely publish any kind of information.

"No act of legitimate journalism, however offensive some might find it, justifies an act of violence," said State Department spokesman Jeffrey Rathke.

As protesters in Dakar and Mauritania torched French flags, Qatar and Bahrain warned that the new Prophet Mohammed cartoon published Wednesday by the French satirical weekly could fuel hatred.

The latest issue of Charlie Hebdo features a cartoon of Muhammad on its cover holding a "Je Suis Charlie" (I am Charlie) sign under the headline "All is forgiven".

Distributor MLP said the weekly had sold 1.9 million copies so far, with a total of five million to be printed, compared with its usual sales of around 60,000.

It was the first edition since brothers Cherif and Said Kouachi gunned down 12 people in an attack on the magazine's Paris offices on January 7th over such cartoons.

The image has angered many Muslims as depictions of Mohammed are widely considered forbidden in Islam.

On the Muslim weekly day of prayers, thousands flooded the streets of Bamako in response to calls by leading clerics and Mali's main Islamic body, chanting "Hands off my prophet" and "I am Muslim and I love my prophet".

In Jordan's Amman, around 2,500 protesters set off from Al-Husseini mosque under tight security, holding banners that read "insulting the prophet is global terrorism".

There were clashes between protesters and riot police in Algiers, where up to 3,000 marchers chanted "We are all Muhammad", though some shouted their support for the Islamist Kouachi brothers. AFP photographer Asif Hassan, a policeman and a local TV cameraman were injured in Karachi when clashes broke out there between police and protesters.

A police official said the violence began when authorities prevented some 350 protesters from approaching the French consulate in the sprawling metropolis.

Elsewhere in Pakistan, protesters in Peshawar and Multan burnt French flags on the streets, while rallies were also held in Islamabad and Lahore.

In Dakar, the capital of Senegal, police fired tear gas grenades to disperse about 1,000 protesters who chanted "Allahu Akbar" (God is Greatest) and torched a French flag.

In Nouakchott in Mauritania, thousands marched chanting "We are here to defend the prophet". Some set fire to a French flag after security forces prevented them from reaching France's embassy, witnesses said.

Mauritanian President Mohamed Ould Abdel Aziz addressed the marchers, condemning the controversial cartoon as "an attack on our religion and on all religions".

Hundreds of Palestinians demonstrated quietly in Jerusalem's flashpoint Al-Aqsa mosque compound, some with banners reading "Islam is a religion of peace!"

While in Khartoum, hundreds poured out of the Grand Mosque and marched across the adjacent square, chanting "Expel the French ambassador. Victory to the Prophet of God!"

In Lebanon's flashpoint city of Tripoli, 70 people marched with banners bearing the name of the prophet and chanting.

Prayer leader Sheikh Mohammed Ibrahimi addressed hundreds of worshippers in Baddawi, on the outskirts of the city, saying: "May God punish this newspaper and those who back it".

Protests also erupted in areas of conflict-hit Syria held by rebels and jihadists with demonstrators demanding "respect for religions", said the Syrian Observatory for Human Rights.

A protest in Tehran was cancelled, with no official reason given, as senior Iranian cleric Ayatollah Ali Movahedi Kermani told worshippers the cartoon's publication amounted to "savagery". Muslim governments also joined the chorus of condemnation of the cartoon.

Qatar branded as "offensive" the drawing, which was reprinted by several European papers in a show of solidarity with the victims of last week's attack.

"These disgraceful actions are in the interest of nobody and will only fuel hatred and anger," the foreign ministry warned.

Bahrain's foreign ministry echoed that, saying publication of such cartoons "will create fertile ground for the spread of hatred and terrorism".

Charlie Hebdo's latest cartoon is "disgraceful" and no more than attempt to provoke Muslims and mock their beliefs, it said.

Qatar and Bahrain had sent representatives to a massive march in Paris last Sunday in support of free speech, alongside French President Francois Hollande and many other world leaders, including Muslims.