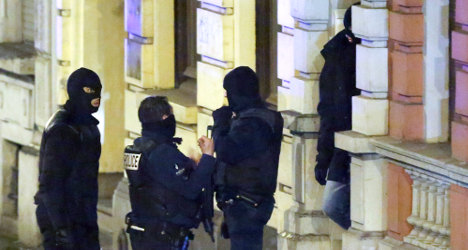 Both French and Belgium police carried out raids overnight to Friday. Photo: Bruno Fahy/Belga Press/AFP
The nine men and three women were to be questioned about "possible logistic support" they may have given to the gunmen, in particular weapons and vehicles, the source said.
Raids were still taking place in Montrouge just outside Paris, where gunman Amedy Coulibaly killed a policewoman last week, Grigny where he grew up, Fleury-Merogis south of the French capital and Epinay-sur-Seine north of the city.
According to a police source, investigators have followed several people over the past few days that had been pinpointed thanks to probes on people in the alleged entourage of the Kouachi brothers, who waged the Charlie Hebdo attack, and Coulibaly, who killed a policewoman and four Jews in a supermarket.
Among other things, they are looking for the car of Hayat Boumeddiene, Coulibaly's wanted partner who is now believed to be in Syria.
The source said that investigators have in the past few days secured DNA and conducted wiretapping of those believed to have been close to the gunmen.

According to police, Coulibaly went to visit old friends in Grigny just days before he embarked on his killing spree in Paris.

Belgium was also on high alert Friday after two suspected jihadists were shot dead in a shootout with police in a raid in the eastern town of Verviers overnight.

Police said that they had averted "imminent" large-scale attacks on police targets, adding the members of the terror cell had recently come back from Syria.

Two of the suspects were shot dead by police after they opened fire on officers with heavy weapons.

A third man has been arrested and several search operations are underway in Brussels and its suburbs.

But French Prime Minister Manuel said there appeared to be no "direct" link between the anti-terror raids in Belgium and last week's attacks in France.

"We don't think there is a direct link" between the two events, said Valls,adding: "The link that exists is the desire of terrorists to attack our values, our compatriots," he said.

And in Germany, police on Friday arrested two Turkish men in Berlin, suspected of plotting a terrorist attack in Syria.

According to police and Berlin state prosecutors, the two men, aged 41 and 43, had pledged allegiance to terrorist political group Islamic State (Isis) and were planning a massive attack on Syrian soil.

Three other men are being held in suspicion of having a participatory role in the planned attacks.

Around 250 officers and three Special Operations commands carried out the raids on 11 homes in and around Berlin.

To limit the overwhelming burden on our moderators, it will not be possible to comment on this article. Feel free to join the conversation on our Facebook page.
Url copied to clipboard!