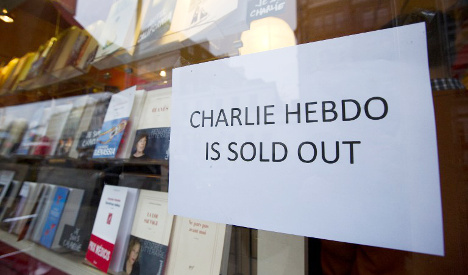 A London bookstore reports that the magazine has sold out. Photo: AFP
Hundreds of people lined up before daybreak in London on Friday to buy copies of French magazine Charlie Hebdo, but those hoping to get an English copy were disappointed as newsagents awaited delivery.
Around 200 people queued up in South Kensington, home to much of London's large French community, outside two French bookshops both stocking the latest edition of the magazine that was the focus of last Wednesday's deadly terror attack in Paris.
Small groups of customers were let into the tiny Libraire La Page as it opened at 8:15 am, battling their way through ranks of photographers and cameramen to buy one of the shop's 360 copies, priced at £3.50 (€4.60) each.
"This will go in a picture frame up on the wall," said composer Matthew Acheson, 35, one of the first to get his hands on a copy, depicting the Prophet Muhammad on its cover.
"You should be able to write whatever you want to write, you shouldn't be cowed by an archaic system of belief. That doesn't just mean Islam, it means every form of religion," he added.
"Every newspaper in the country should be publishing the photo of the cover."
London is often described as France's "sixth city" with an estimated expat population of between 300,000 and 400,000.
A staff member at the bookshop, who wished not to be named, said it had been an "obvious" decision by the manager and co-workers to stock the magazine.
"We are not afraid, we are just doing something we think is right. We don't want to offend anyone, but I can perfectly understand why people don't like it," she said.
Meanwhile, so many people in Denmark have asked about the new edition of Charlie Hebdo that the magazine distribution company is trying to massively increase its order to meet demand.
In France, the edition sold on instantly on Wednesday and in many kiosks on Thursday too. Disappointed Parisians are turned away on repeat on corners all over the capital.
'Controversial' at school
In London, 16-year-old school student Amelia Wightwick proudly held up her copy, saying that it could provoke lively debate later in the classroom.
"I go to an international school, so it could be quite controversial," she explained.
"I'll tell my friends, but I know who I need to avoid telling".
In Soho, newsagents had been due to start selling an English edition of the magazine overnight.
People had gathered outside but dispersed when told there were no immediate prospects of delivery.
School student Sidney Draper, 18, was first in line in Soho having waited for over three hours in freezing conditions.
"It's just to see for myself," he said. "I might read it and not like it at all, but it's about the freedom to make your own judgement."
Radio producer James Wilson said the world had been gripped by the "grim magnitude" of the Paris attacks that claimed 17 lives, many of them  Charlie Hebdo employees.
"To be killed in an editorial meeting, albeit for an offensive magazine, with a pen in hand, is probably what's triggered this," he said.
Url copied to clipboard!