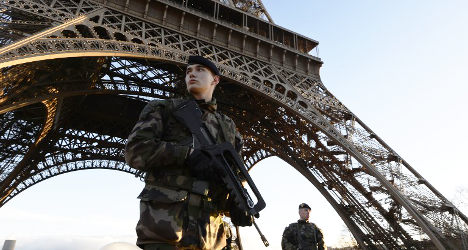 France has deployed 10,000 troops following the attacks of three crazed gunmen on the satirical Charlie Hebdo magazine and a Jewish supermarket that left 17 people dead.

After it emerged that a Jewish school in Montrouge may have been the initial target of one of the terrorists, around 5,000 police officers were sent to offer the country's 700 Jewish schools extra protection.

Troops are also patrolling the airports, train stations and major tourist attractions in Paris, making armed forces a common sight in the capital.

By the Eiffel Tower, a tourist from Brittany says the capital has changed.

"It feels a bit like being in a war zone," she said.

"I suppose it’s necessary but it’s also a reminder of everything that’s happened."

A woman from London who is visiting Paris with a friend said they nearly cancelled their trip when they heard about the attacks.

"We were petrified," she said. "We only decided to come once we knew that the gunmen weren’t on the loose anymore."

Even though the situation now has calmed down they still don’t feel completely safe.

"We don’t even really want to use the subway," she said. "And we’re staying away from Jewish neighbourhoods. You never know, there might be another attack."

While it may have been down to bad weather, the area around the Eiffel Tower seemed oddly deserted compared to the usual hordes of tourists waiting in line to ascend the 324-metre-tall structure.

Only a few tourists are visiting the Eiffel Tower. Photo: The Local

A young man selling little Eiffel Tower figurines told The Local he noticed that ever since the attacks fewer people were heading to the famous landmark.

"It definitely has to do with what’s happened," he said. "There are certainly fewer tourists here than before. I think people are scared."

Maria Biriukova, a tourist from Russia, didn’t let the shocking events deter her from visiting the City of Light.

"I love Paris," she said. "Of course I wanted to come back. No attack can change that."

Maria Biriukova won't stop visiting Paris because of what has happened.

While she was in favour of stepping up security, not everybody shared her view.

"The police don’t really make me feel safer," Korean tourist Hwang Yaein told The Local after taking some selfies with the impressive Notre Dame cathedral as a backdrop.

"The weapons and uniforms scare me."

The famous cathedral sits on the eastern half of the Île de la Cité.

Hela Abdelkefi, a tourist from Tunisia, arrived in the capital the day before the bloody attacks that left 17 people dead.

"I am fine with all changes the government needs to make in order to make people feel safe again," she told The Local. Hela Abdelkefi participated in the “extraordinary” unity rally on Sunday.

As a Muslim, she was outraged by the attacks the gunmen claimed to carry out in the name of her religion.

"These men had nothing to do with Islam," she said. "Our prophet would never condone this."