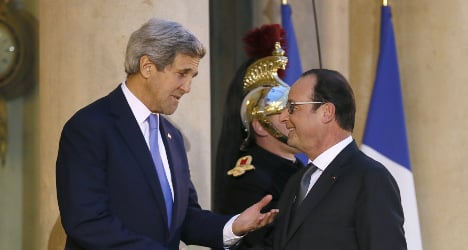 Kerry wants to give Paris a 'big hug' in the wake of the deadly terrorist attacks.Photo: Patrick Kovarik/AFP

Kerry, who arrived in Paris on Friday, made the apology to French Foreign Minister Laurent Fabius as the two diplomats met to lay wreaths outside the Jewish supermarket and the offices of satirical magazine Charlie Hebdo which were targeted last week in deadly extremist attacks that claimed a total of 17 lives.

Sunday's massive march in Paris against terrorism drew dozens of world leaders in a show of unity – but not from from the United States, which was represented by its ambassador.

The White House earlier this week admitted it had made a mistake not sending a higher-ranking representative to the mammoth march, and on Tuesday, Kerry said he wanted to come to Paris to give the capital “a big hug”.

"My visit to France is basically to share a big hug for Paris and express the affection of the American people for France and for our friends there who have been through a terrible time," Kerry said ahead of his arrival.