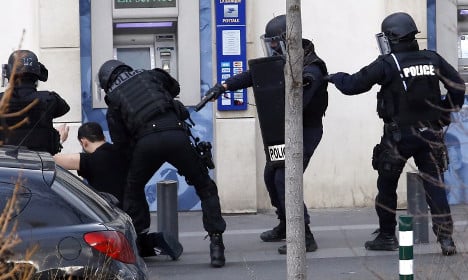 Police capture the gunman on Friday afternoon. Photo: AFP
The man was arrested after 2.30pm on Friday, following a hostage drama that lasted several hours in a post office in Colombes.
"There was no assault, the man gave himself up", a police source told the AFP news agency, adding that the hostages were "shocked but not injured".
The man, who was already known to police, was "speaking incoherently" and was heavily armed with grenades and Kalashnikovs.
Social media users reported a large police presence on the scene including a helicopter. Police prepare to enter the building. Photo: AFP
A police officer told the Libération newspaper that the hostage taker was "a customer who didn't appear to be all there in the head, talking about romantic disappointment".
Another officer, Mickaël Cotrez, said that the hostages were taken after an armed robbery.
As social media buzzed with theories about the drama, one tweeter wrote: "All these tweets don't make us worry less about the hostages. Let’s hope for an end without any shooting, without drama."
While reports suggest the hostage situation has nothing to do with a terror attack, France is still on edge after last week's attacks, which saw 17 people killed. Four of them were shot dead after being taken hostage in a kosher supermarket to the east of the city.
Url copied to clipboard!