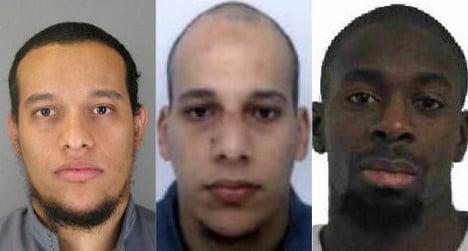 “All three are French,” Jean-Luc Bringuier, legal expert in funeral matters, said about the need to bury the Kouachis and Coulibaly on French soil.

Under French law, the deceased must be buried in either their home district or in the place where they passed away, with relatives having the final say on the matter.

But the mayors of Gennevilliers and Reims, the towns where Cherif and Said Kouachi resided, are fearful that the graves could become rallying points for the many Islamist radicals in France who have already voiced their admiration for the 12 murders the brothers committed at Charlie Hebdo’s offices last week.

According to Antoine Flasaquier, lawyer for Said Kouachi’s partner, his client wishes to “keep the place of burial confidential so that the grave doesn’t become a headstone of remembrance for the deranged”.

Authorities in Dammartin-en-Goelle, the small town 30 kilometres northeast of Paris where the Kouachi brothers were gunned down by police, told French daily Le Figaro: “If we have to obey the law we will do so, but we’d rather avoid it”.

The relatives of Amedy Coulibaly, the other terrorist shot dead after his siege of a Jewish supermarket, will also have to decide whether he is buried in the Paris suburb of Fontenay-aux-Roses where he lived or in the French capital itself.

The delicate matter has reminded the French public of the controversial burial of Mohamed Merah, who in 2012 killed seven people, including three Jewish children and a rabbi, in Toulouse and Montauban, southern France.

Toulouse authorities called for his body to be sent to Algeria, where his parents were originally from, to prevent his grave from becoming a place of worship for Islamist radicals in the city. Algerian authorities bluntly rejected the proposition.

Nicolas Sarkozy, French President at time, put a stop to the debate, claiming: “He’s French, he must be buried here and let’s stop adding fuel to the fire.”

Merah was finally buried in the Toulouse suburb of Cornebarrieu and given an unmarked gravestone.

The same is likely to apply to the Kouachi brothers and Amedy Coulibably.

“All three are French,” Jean-Luc Bringuier, legal expert in funeral matters, told online daily Le JDD about the requirement of burying the terrorists on French soil.

“Only sensitive cases, when mayors have the right to speak out about the burials, can see a police presence during the service and make sure the gravestone remains anonymous.”

No decision has yet been taken as to the final resting ground of the Kouachis and Coulibaly, their bodies still being preserved in hospital morgues until further notice.