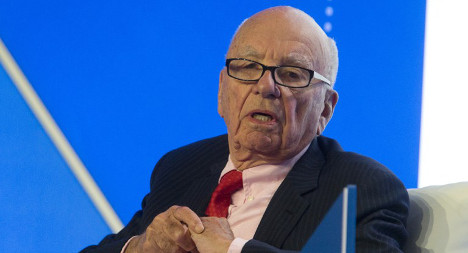 "Certainly did not mean all Muslims responsible for Paris attack. But Muslim community must debate and confront extremism," Murdoch said in a tweet that followed a barrage of criticisms of a comment made last week.

The 83-year-old media baron's comments about the bloody assault on French magazine Charlie Hebdo stirred up taunts and angry replies, many using the hashtag #RupertsFault.

The Australian-born head of News Corp. and 21st Century Fox drew fire for his January 9 tweet which said, "Maybe most Moslems peaceful, but until they recognize and destroy their growing jihadist cancer they must be held responsible."

Criticism was led by Los Angeles-based comic Aziz Ansari, who wrote, "Are you responsible for the evil shit all Christians do or just the insane amount of evil you yourself contribute to?"

Ansari also asked Murdoch, "can we get a step by step guide? How can my 60 year old parents in NC help destroy terrorist groups?"

After Murdoch's latest tweet, Ansari fired back, "Hahahah you got forced to do a fake apology tweet!!! AHAHAHAHA YOU LOSER."

Over the past few days, dozens of Twitter users mocked Murdoch for his comments using the hashtag.

Another user tweeting under the name "Shariah Bolshevik" wrote, "The Crusades which he CONVENIENTLY never denounced or apologized for."

Harry Potter author J.K. Rowling weighed in on the debate, tweeting, "I was born Christian. If that makes Rupert Murdoch my responsibility, I'll auto-excommunicate."