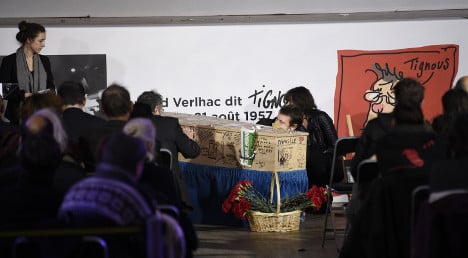 Georges Wolinski, 80, and Bernard “Tignous” Verlhac, 57, were laid to rest in private family funerals after they were gunned down by two Islamist brothers in last week's attack claimed by Al-Qaeda.

Wolinski's funeral was held at noon at Pere Lachaise cemetery, renowned for being the resting ground of many famous figures such as The Doors singer Jim Morrison and writer Oscar Wilde.

Fellow cartoonist Tignous had his funeral at the same place following a memorial ceremony at Montreuil Town Hall in eastern Paris.

His friends and family signed and drew caricatures all over his coffin as a symbolic goodbye.

As hundreds gathered outside the town hall to pay their tributes, Lebanese trumpet player Ibrahim Maalouf honoured Tignous with a song.

After the shooting at the magazine, which killed 12 people, the French battled to get their hands on Charlie Hebdo's "survivors' issue" which sold out Wednesday before more copies of an eventual print run of five million hit newsstands.

Long queues formed throughout the country again on Thursday as copies again quickly ran out.

"Charlie Hebdo is alive and will live on," Hollande said Wednesday. "You can murder men and women, but you can never kill their ideas," he said, declaring the previously struggling weekly "reborn".

The Charlie Hebdo assault on January 7 was followed two days later by an attack on a kosher supermarket in Paris by a gunman claiming to have coordinated his actions with brothers Said and Cherif Kouachi.

In all, 17 people died over three days in the bloodiest attacks in France in half a century, which ended when commando units stormed two hostage sieges and killed all three gunmen.

In Wednesday's new edition of Charlie Hebdo, the prophet is depicted with a tear in his eye, under the headline "All is forgiven". He holds a sign reading "Je suis Charlie" (I am Charlie), the slogan that has become a global rallying cry for those expressing sympathy for the victims and support for freedom of speech.