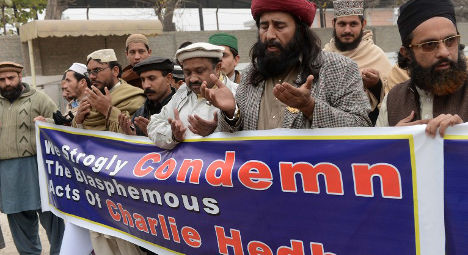 The parliamentary resolution, which also criticized Western media for reprinting the caricatures, comes a week after the government officially condemned the murder of 12 people at the offices of the weekly on January 7 in Paris as a "brutal terror attack".

The magazine this week published a "survivors" issue featuring an image of the Prophet Muhammad weeping, which sold out Wednesday before more copies of an eventual print run of five million hit newsstands in France.

"This house strongly condemns (the) printing and reprinting of the blasphemous caricatures… and also takes serious note of the continued trend of their reproduction in numerous other newspapers and magazines of other Western capitals," the resolution said.

"This house genuinely believes that freedom of expression should not be misused as a means to attack or hurt public sentiments and religious beliefs," it added.

Hundreds of protesters held rallies in the eastern city of Lahore and Quetta in southwestern Pakistan, while dozens of activists in central Multan burnt the French flag.

Mobs often take matters into their own hands and lynch those accused of blasphemy, and such killers are widely feted.

After passing the resolution lawmakers and parliament employees marched on Constitution Avenue raising placards bearing slogans including "Allahu Akbar" and "We are ready to serve of Prophet Muhammad".

Federal Minister for Religious Affairs Sardar Yousuf of the ruling PML-N party told reporters outside parliament that all Pakistanis condemned the cartoon and saw it as "a conspiracy against Islam hatched through Western media".

Elsewhere on Thursday, Pope Francis condemned any killing in God's name, but also insisted there were limits to freedom of speech.

"To kill in the name of God is an absurdity," the pope told reporters aboard a plane travelling from Sri Lanka to the Philippines.

But the 78-year-old pontiff also said "each religion has its dignity" and "there are limits".

"Freedom of speech is a right and a duty that must be displayed without offending."

The spiritual leader of Bosnia's Islamic community has also slammed the new issue of French satirical magazine Charlie Hebdo for again featuring cartoons of the Prophet Mohammed that many Muslims find offensive.

"We condemn in the strongest possible terms the abuse of freedom of speech and artistic expression used to humiliate, with premeditation, other people
and what is sacred to them," Grand Mufti Husein Kavazovic said in a statement.

The objective in publishing new cartoons, he said, was to "present the honourable face of the Prophet Mohammed in an odious and lying way".

"To limit the overwhelming burden on our moderators, it will not be possible to comment on this article. Feel free to join the conversation on our Facebook page.