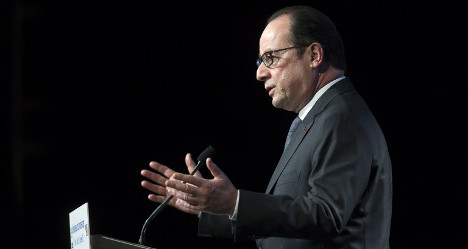 Speaking at the Arab World Institute in Paris, Hollande said: "It is Muslims who are the main victims of fanaticism". Photo: Ian Langsdon/AFP

Speaking at the Arab World Institute in Paris, Hollande said: "It is Muslims who are the main victims of fanaticism, fundamentalism and intolerance", adding the whole country was "united in the face of terrorism."

Members of the Muslim community in France, Europe's largest, have "the same rights and the same duties as all citizens" and must be "protected," the president vowed.

"You can murder men and women, but you can never kill their ideas," Hollande added, declaring the previously struggling weekly "reborn".

Even as the ceremonies took place, the satirical magazine continued to fly off the shelves, sparking fury in some parts of the Muslim world for depicting the Prophet Muhammad on its cover.

Georges Wolinski, 80, and Bernard "Tignous" Verlhac, 57, were buried at private family funerals after they were gunned down by two Islamist brothers
in the attack claimed by Al-Qaeda.

Thousands braved drizzle outside the town hall memorial service for Tignous, laying flowers under a huge portrait of the cartoonist as his wife Chloe paid tribute inside.

His cartoon-covered coffin was carried through an applauding crowd for final burial.