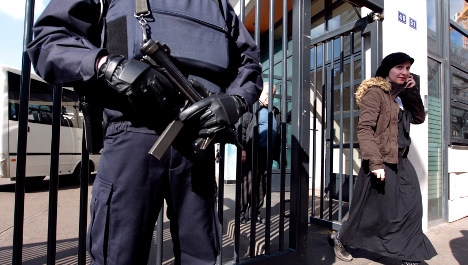 "The children understand very well what happened and we're in the process of talking to them about it," the director told The Local. Photo: Kenzo Tribouillard
The Yaguel Yaacov school in Montrouge, southern Paris, is just 100 metres from where Amedy Coulibaly murdered a policewoman before killing four Jewish people during a hostage drama in the city's east.
Catherine Hacoun, the school's administrative director, has spoken out with "strong presumptions" that the attack was supposed to be carried out at the school and not at the supermarket.
Others claim that when Coulibaly was involved in a car accident at the scene, his meeting with a trainee policewoman was enough to scare him elsewhere.
Whether or not this is the case, the school is now under strict security. The entrance is guarded by two armed guards. Visitors and students alike must pass through two doors to get inside, armed by another three guards hired by the school.
A sign on the door explains that the operation is part of an anti-terrorist security scheme.
Michèle Favre, the headmistress, told The Local that the school is awash with a feeling of "awkwardness and uncertainty".
"But the governmental authorities help us a lot," she added.
Indeed, French authorities have bolstered security efforts for Jewish schools and synagogues across the country, announcing on Monday that it was sending nearly 5,000 security forces to protect France's 700 Jewish schools.
Favre adds that given that the policewoman was shot so close to the school grounds, there has been a strong reaction on the part of students and their parents.
"We feel more at risk now considering the shooting took place just next to us, but we have to get back to our normal lives, little by little," she tells The Local.
"As I was growing up, France was a safer country. But now, after everything that's happened…" she says, trailing off.
"The children understand very well what happened and we're in the process of talking to them about it."
France's Jewish community numbers around 500,000, enough to make it the third biggest Jewish community after Israel and the United States.
Favre says that while the marches by millions of demonstrators on Sunday sent a "reassuring" message of unity, she thinks more needs to be done to quell the fear in the Jewish community.
"We need to see the French reacting," she concludes.
To limit the overwhelming burden on our moderators, it will not be possible to comment on this article. Feel free to join the conversation on our Facebook page.