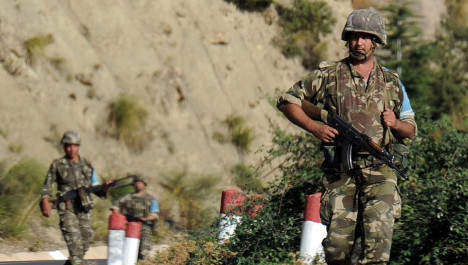 The Algerian army on the search for the Frenchman's body. Photo: AFP

The body of Herve Gourdel was found buried without the head in Akbil, where Gourdel was abducted by the Jund al-Khilafa (Soldiers of the Caliphate) group, sources told the AFP news agency on Thursday.

The army had mobilised 3,000 troops to find the 55-year-old mountain guide's body, and launched a new search operation on Wednesday.

Excavations were carried out in Akbil and in the neighbouring towns of Abu Youssef following a tip-off by an Islamist detainee, a security source said.

The search was headed by an elite army unit and aided by sniffer dogs.

Gourdel was abducted by Jund al-Khilafa on September 21st, while hiking in a national park in eastern Algeria.

He was beheaded days later in a gruesome video posted online after France rejected the jihadists' demand to halt air strikes against the Islamic State group in Iraq and Syria, to which Jund al-Khilafa had pledged allegiance.

In December, the army said it had killed the leader of the militants that beheaded Gourdel.

The body of Abdelmalek Gouri, who had claimed responsibility for the Frenchman's killing, was identified after an operation in which two other suspected militants were killed.

To limit the overwhelming burden on our moderators, it will not be possible to comment on this article.