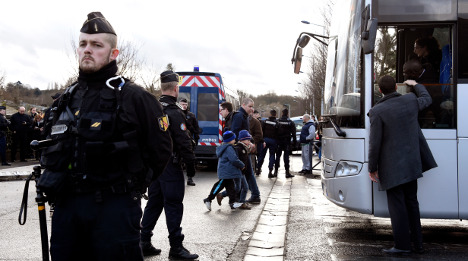 The Gendarmerie stand guard as a school in Paris is evacuated. Photo: AFP
France's Gendarmerie was a major force during the Paris terror attacks that left 17 dead at a satirical magazine office and a kosher supermarket.
Around 32,000 troops were deployed, together with 50,000 police officers, in the hunt for the perpetrators and to ensure the public were protected afterwards.
But it was the Gendarmes on social media who made the news in France after the dust settled, with the L'Express newspaper running a headline: "How the Gendarmerie stole the show on Twitter".
Throughout the three-day terror attack, Lieutenant Colonel Gwendal Durand orchestrated a social media push to keep the public updated, to call for witnesses, and to share the inside story from places too dangerous for the world's media.
Tweets included pictures and videos from the scene, as well as an inside look into how officials at headquarters were tackling the case. In the tweet below, officials show how the team prepared an assault on the printing press that housed the first hostage shootout.

The efforts earned the team an extra 20,000 followers on Twitter and twice that on Facebook, and Durand told L'Express that a large audience was key.
"The number of subscribers is important," he said. "The more you have, the stronger the resonance, and that's vital for the dissemination of all the information – including everything from crisis management to ensuring people's safety."
"The key part of it all is an open dialogue with the public."
The social media coverage hit a peak on Friday, when the forces shared hourly updates as France and the world tuned in to hear the latest on the two brothers. Below, the team show the result of another exchange of fire between the Islamic extremists and the Gendarmerie.

The team sent out a photographer, a videographer, and two members of the press office to cover the drama – and the French Twitter audience lapped it up. A video taken in the midst of the hostage drama (shown in the tweet below) has amassed over 1.6 million hits on the Gendarmerie's official YouTube channel.
But Durand denied that his team was taking advantage of the fact that the international periscope was firmly aimed on France last week. He said the tweeting and Facebooking has been part of "an editorial strategy" that has been in place for a year and a half.

He added that his team had no intentions of competing with the newspapers, either.
"What we are doing is even stronger when the media are kept away, but it can be done on any operation. We are complementary," he concluded.
It was perhaps little surprise that crowds cheered as the Gendarmes drove through the streets of Paris on Sunday when millions marched in solidarity (see below). And it was also, perhaps, no surprise that the team took to Twitter in thanks, adding that the Gendarmerie would remain committed to France's safety.

To limit the overwhelming burden on our moderators, it will not be possible to comment on this article. Feel free to join the conversation on our Facebook page.
Url copied to clipboard!