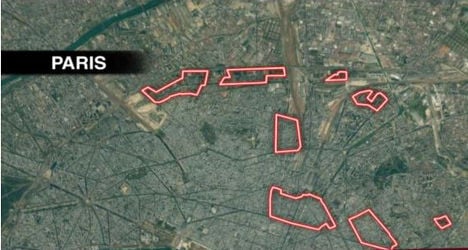 Fox news reports that there are eight 'no-go zones' in Paris. Photo: Screengrab/Fox news
An expert on Fox News outraged and baffled members of the French public after listing eight "no-go zones" for non-Muslims in Paris, areas where Islamic rules were followed rather than those of the French.
National Security Analyst Nolan Peterson, who spent two years in Paris a decade ago, told the channel that areas within a ten-minute drive from the Eiffel Tower were comparable with Baghdad, adding that he had seen people wearing t-shirts supporting Osama Bin Laden.
The sentiments were echoed by Nigel Farage, the leader of the Eurosceptic Ukip party in the UK, who said that the zones in Paris matched a rise in the "big ghettos" of Europe.
Fox news followed its interview with an article on the same topic, which prompted outrage from French users who said the risks were blown out of proportion.
The zones included the Porte Saint Denis neighbourhood, Porte de Clignancourt, Porte de Clichy, the southern part of the Belleville neighbourhood, and the La Goutte d’Or. They were classified by the French government in 1996 as "sensitive urban zones".
But how dangerous are these areas and are they truly no-go zones?
The Local's Simone Flückiger headed for a lunchtime walk around La Goutte d'Or in the 18th district of northern Paris to meet locals and hear their side.

Photo: David Dufresne/Flickr
A 49-year-old man, who preferred to remain anonymous, hadn't seen the report but said the security analyst "doesn't know what he's talking about".
"He's probably never even been here," he told The Local.
"And of course non-Muslims are welcome. Everybody is. The atmosphere is very social, everybody sticks together. You could walk into that restaurant right now and the people would give you food for free if you didn't have any money. Try doing that at the Champs-Elysées," he added, pointing to a Middle Eastern restaurant across the street.
Another local echoed the sentiments.
"I’ve lived here for five years, and everybody can go wherever they like," said 30-year-old Zakarya. "When I was in Marseille, on the other hand, I was actually told that I couldn’t go to certain places. But this isn’t the case in this neighbourhood."
Sixty-three-year-old grandmother Fadila said that that La Goutte D'Or was safe, arguing that she even spots tourists passing through.
"Muslims and Christians live side by side here. It’s not a dangerous neighbourhood," she said.
A Muslim in his twenties added that anyone calling neighbourhoods in Paris "no-go zones" were racist. Photo: Jonte/Flickr
But not everyone was optimistic about the neighbourhood. One 50-year-old woman, Sylvie, said the area had changed over the years.
"I don’t think there’s a lot of trouble here," she added. "However, I wouldn’t come here at night. The neighbourhood is mostly frequented by men so you don’t really feel comfortable as a woman."
"I think there used to be more different backgrounds in this neighbourhood a few years ago. The population was more mixed," she explained.
"But I think this is because officials in Paris are trying to push the poorer population to the edges of the city and to the suburbs by tearing down old buildings and replacing them with newer, more expensive ones that those people can’t afford any longer."
Back in the US, security expert Nolan Peterson wrote on his website that his comments prompted hundreds of messages of hate mail and even death threats.
He apologized for the inaccuracy of the statement, adding: "If I ever have the opportunity, I would love to visit Paris again to see how those areas have changed from the way I experienced them in November 2005. I'm sure it would make me proud and hopeful for France."
To limit the overwhelming burden on our moderators, it will not be possible to comment on this article. Feel free to join the conversation on our Facebook page.
Url copied to clipboard!