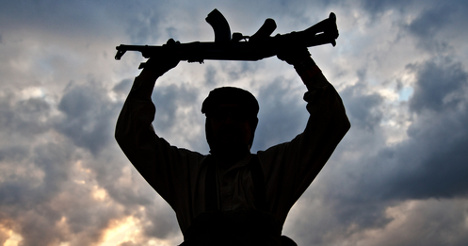 The Taliban lauded the gunmen for "bringing the perpetrators of the obscene act to justice". Photo of Taliban: Shutterstock
An English statement from the group said they "strongly condemn this repugnant and inhumane action and consider its perpetrators, those who allowed it and its supporters (to be) the enemies of humanity".
It added the gunmen who killed the magazine staff on January 7th were "bringing the perpetrators of the obscene act to justice".
On Wednesday, French President Francois Hollande declared Charlie Hebdo was "alive and will live on" after its new edition sold out in record time, as Al-Qaeda claimed responsibility for the attack.
"You can murder men and women but you can never kill their ideas," Hollande said.
In the magazine's latest edition, the prophet was depicted with a tear in his eye, under the headline "All is forgiven", and holding a sign reading "Je suis Charlie" (I am Charlie).
The issue was published on Wednesday morning and sold out instantly. One kiosk owner told The Local that there was a queue stretching around the corner from 6am. Some newsagents on Thursday were forced to turn away customers again after selling out for the second time.
The Taliban, which ran a hardline Islamic government in Afghanistan from 1996-2001, said world leaders should prevent such cartoons from being released.
They said publication must be stopped to prevent "further harming world peace", adding that to do otherwise would mean "the beliefs and sacrosanctity of over a billion people is desecrated and the world is pushed further into the fire of hatred and war".
A few hundred people demonstrated last week in the central Afghan province of Uruzgan, praising the gunmen and criticizing President Ashraf Ghani's condemnation of the attack in Paris.
Previous insults to Islam have sparked violent protests in the ultra-conservative Muslim country.
To limit the overwhelming burden on our moderators, it will not be possible to comment on this article. Feel free to join the conversation on our Facebook page.
Url copied to clipboard!