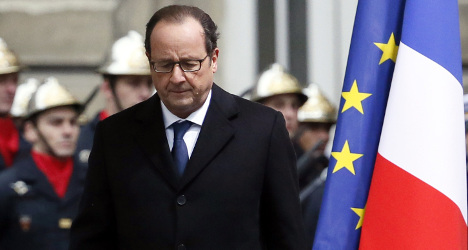 What happens now for Hollande, Paris and France? Photo: AFP

It’s perhaps unfortunate that it’s taken the bloodiest series of terror attacks in the country’s recent history to restore the faith of the French in their country and themselves.

And yet the sheer volume of people who took to the streets on Sunday – approximately four million – singing the Marseillaise, is quite possibly the most positive sign of hope for a now traumatized country.

Even the parliament rose as one to salute the PM this week and Parisians have reported that the capital's residents seem to have developed a new warmth for one another.

“We are a nation”, beamed Liberation newspaper on Sunday, with its editor Laurent Joffrin saying: “The Republic had been hit in the heart, two days later the Republic rose up.”

But away from the marches, the vigils and the defiant speeches, cracks are already beginning to appear in this new found unity.

Evidence that France is not quite as unified in grief can be seen on social media where the hashtag #JeSuisKouachi has been used thousands of times to express support for the brothers behind the Charlie Hebdo shootings.

Not everyone in France is saying "Je suis Charlie" and not everyone is happy the provocative newspaper has become the symbol of freedom of speech.

Proof of that can be seen in the country's schools where there were dozens of reports of pupils refusing to respect a nationwide minute's silence last Thursday.

And on Wednesday there were reports of fights between pupils from rival schools in the town of Senlis to the north of Paris, with one group of pupils goading another by shouting support for the killers of  the Charlie Hebdo editorial team.

France will need to ensure that the sentiments of those who say "I am Charlie", "I am Jewish", "I am police" and "I am Muslim" remain united for the same cause rather than splinter off and turn against each other.

It only took a matter of days before the French PM announced that the government would be pushing for more online surveillance powers as well as plans to boost its intelligence services.

"We have to focus on the Internet and social networks, which are more than ever used to recruit, organize and disseminate technical know-how to commit terrorist acts,” said Manuel Valls.

His proposals included beefing up surveillance of imprisoned radicals, speeding up current laws when it comes to searching suspects' homes or wiretapping their phones, and a closer look at how to fight the rise of terrorist recruitment in social media.

"I have asked the Interior Minister to send me some propositions to strengthen our powers in the next eight days," he said.
At an EU level there are calls for all passenger information on flights to be shared between countries.
Valls promised that the measures he proposes will not impinge on civil liberties but while the attacks are still fresh in the mind it's unlikely the government will face much opposition to its proposals.

Hollande: Hero or back to zero?

Less than a week ago, France's Francois Hollande was a president in deep trouble, his popularity at an all-time low and his lack of leadership widely attacked. He must have been sick of hearing of polls talking about his record low popularity levels, but he might want to listen up now.

After the deaths of 17 people in three days of terror sparked the biggest rally in French history with Hollande leading 1.6 million people and dozens of world leaders through the streets of Paris, his image has changed – if only temporarily.

Often mocked as “Mr Normal” for lacking the gravitas of a world statesman, his ‘man of the people’ persona provided one of the most iconic and moving images of Sunday's rally, as he comforted a sobbing colleague of the slain Charlie Hebdo cartoonists in a warm embrace.

"He needed to capture the unity of the nation and I think he did it,” historian Alain Bergounioux argued.

Polls published on Wednesday say 79 percent of the French public would salute the way Hollande has handled the crisis, and that his popularity has risen by eight points in those pesky polls to 29 percent, according to Le Parisien.

But will this sudden spike in popularity last until the next elections?

"The memory will linger but unemployment, deficits and taxes will come back to the fore," Jerome Fourquet, from polling company Ifop told AFP.

There have been over 50 anti-Muslim incidents reported in France since Islamic terrorists opened fire on the offices of satirical magazine Charlie Hebdo, the French Muslim Council has revealed.

Such a reprisal was "predictable", said Samy Debah, the president of the Collective Against Islamophobia in France (CCIF).

"The reality of discrimination is catching up with us," he told The Local on Monday.

"Muslims are scared. I'm scared for my mother, my sister. I live in a working class neighbourhood and I would have never imagined that such things could happen."

France's security protection plans include Jewish schools and synagogues, but Muslim places of worship and Muslim shops have so far been overlooked by the government. Ahmed Miktar, the Imam at the Villeneuve d'Ascq mosque near Lille told The Local he thinks that needs to be rectified.

If Muslim groups who opposed the attacks continue to be targeted and deemed a threat to French society, their feelings of exclusion could translate into empathy for extremism and jihadi recruiters.

France's 500,000-strong Jewish community has been traumatized by the murder of four people in the Parisian kosher supermarket on Friday, a harrowing anti-Semitic terror attack.

Even though France will deploy nearly 5,000 security forces and police to protect the 700 Jewish schools around the country, for many this measure isn’t enough.

“They may decide to go to Israel because they simply feel safer."

French courts have already started handing out prison sentences to outspoken supporters of the terror attacks, with one man in the northern French city of Valenciennes being jailed for four years for telling police “there should be more Kouachis. I hope you’re the next (victims)”.

Although the incriminating comments in question are all deplorable, the lines between genuine terror speech and offensive rhetoric may become blurred in the French courts of justice.

Michael Wacquez, one of the defendants’ lawyers, pointed out: "There are 40,000 tweets out there expressing support for the terrorists.

"What are we going to do with all these people? Are French prisons ready to take in 40,000 people, because they made a bad joke on Twitter?"

Dubbed the “French Patriot Act” by its opponents, the country’s new Anti-Terror Bill received the support of a majority of lawmakers in the Senate but was deemed “anti-democratic” by civil liberties groups and some political parties who were wary of the extended powers it granted the government.

Among its most controversial clauses are a travel ban on suspected would-be terrorists and the power to block websites thought to be promoting terrorist acts, without a prior court order.

Staunchly anti-immigration and Islamophobic, the FN is already Europe’s most popular far-right party, having won 25 percent of the French vote in May’s European elections and emerging as a front-runner for France’s presidential elections in 2017.

"Undecided voters may take issues of immigration and Islam into consideration in a way they might not have done if the attacks had not taken place,” researcher and far-right specialist Jean-Yves Camus from Iris think-tank told The Local.

Whether the Paris attacks will tip the balance in Le Pen’s favour could depend largely on how Hollande’s governing Socialist party deals with the threat of future terrorist attacks and how effective new, tougher legislation is deemed by French voters.

Le Pen pointed out this week that the French PM's declaration of "war" against Islamic extremism was something she had been calling for, for a long time.

The French government will need to convince the public it is prepared for the battle to keep voters away from the National Front.

And where does former president Nicolas Sarkozy stand in all this? His efforts in elbowing his way to the front of the line of heads of states on Sunday have made him the subject of ridicule on Twitter, something that used to be reserved for François Hollande.

Sarkozy may find himself squeezed out between the government and the National Front in the aftermath of the attacks.

The image of France abroad

Paris is the world’s most visited city, but will three days of terror in which images of gunmen on the loose were broadcast around the world affect that title?

Jean-Pierre Mas from the union of tourism professionals believes the tourist industry in Paris won’t be harmed because of the fact that the incidents did not involve tourists and didn’t take place at any of the city’s most famous landmarks.

“In the eyes of the world, France remains a safe country,” he told Le Figaro.

On the other hand the fact the UK foreign office chose to warn all its citizens heading to France in the aftermath of the shootings suggest the attacks will at least have some kind of negative impact.

As for the overall image of France abroad, the sight of millions of people marching in union days after a traumatic double siege came to an end has meant a more positive image of the country has been presented abroad for a change, rather than usual one of a country struggling with high unemployment and a knackered economy whose people fight change at all costs.