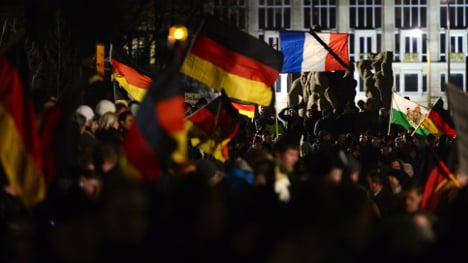 Sympathizers of the German movement Pegida, which opposes what it calls the "Islamisation of the West" attend a march in Dresden, the week after the Paris shootings. Photo: Robert Michael/AFP

Countries across the world were united in their condemnation of the series of shootings in Paris, including the massacre at Charlie Hebdo, with several world leaders marching in solidarity with the French people at the historic anti-terrorism rally in Paris on Sunday.

Back in their home countries, the impact of the shootings of 17 people, including four Jewish people, have been having an impact. Here we’ve rounded up some of the stories related to the Charlie Hebdo attacks from across The Local sites.

The attacks have sparked a heated debate at the heart of the EU between security and freedom.

Among the proposed measures put forward is the creation of a single EU Passenger Name Record (PNR) system, a controversial regime opposed by many in the European Parliament on the grounds it breaches privacy rules in the 28-member bloc.

The proposed system would centralize travel data to allow faster exchange of information about suspects, especially of foreign fighters returning to Europe radicalized and well-trained from the war-zones of the Middle East.

"If we are unable to build a coherent security policy … sooner or later we will put at risk the freedoms we have built up," he warned.

Across the Alps reaction was swift, with the Italian government immediately calling a meeting of its anti-terrorism committee to examine possible threats to Italy. Security was later tightened at the Italy-France border

The government also admitted that one of the perpetrators was in fact known to Italian authorities.

As well as safety concerns, there were a few controversial reactions, with the mayor of Padua announcing that no more permits would be granted for the construction of mosques in the northern Italian city in the wake of the shooting.

Italian philosopher Umberto Eco also made headlines when he compared Isis (Islamic State in Iraq and Syria) to Nazism, saying they shared an "apocalyptic desire to take over the world".

On Sunday, however, the message was overwhelmingly that of solidarity with an estimated 500 people gathering outside the French embassy in Rome to show their support while calling on Europeans to come together in the face of a threat that is no longer "far away from home".

Security was also upgraded in Spain in the wake of the attacks, which saw higher security around public infrastructure and greater police presence on the country's streets.

As well as solidarity from the country's leaders and citizens, Charlie Hebdo was also shown support by Spain's satirical magazines – old and new. One, El Jueves, featured a cartoon on its website that said “a bad time for humour” above a drawing of an inkwell, turned on its side, with blood oozing out of it.

In the latest edition of the magazine, which came out on Wednesday, the magazine's 'blood-stained' front cover pays tribute those killed in the attack.

It’s no surprise that the tremors of the attack were felt so acutely in Denmark, which is home to Jyllands-Posten, the newspaper that printed the original Muhammad cartoons that were reprinted in Charlie Hebdo in 2006, setting the magazine up as a target for Islamic extremists.

The Danish paper later implemented extra security measures in light of the attack.

While the paper grudgingly decided not to republish cartoons from the French magazine, three major papers did.

Kurt Westergaard, the cartoonist behind the most infamous of Jyllands-Posten’s Muhammad caricatures, later picked up his pen in support of the victims of the attack.

Since the attacks, the mood has been uneasy, with a French website reportedly carried a warning that Denmark and Norway would be next. Threats to a Danish mosque were also reported and Denmark's Jewish community have also expressed concerns.

Next door in Sweden the country witnessed an unprecedented outpouring of support from ordinary citizens, keen to uphold the right to free speech.

On Sunday, a whopping 3,000 Swedes braved snow and sub-zero temperatures to gather in central Stockholm for a rally in support of Charlie Hebdo. Police said it was in fact the biggest Winter rally ever recorded.

But not everyone was singing the same tune in Sweden with Swedish peace campaigner Jan Oberg explaining why he feels Swedes – and others – are not Charlie.

Meanwhile, the country's Muslim community voiced fears that there would be a backlash after the shootings. Their fears turned out not to be unfounded after reports of a bomb threat at Gothenburg's main mosque.

Speaking to The Local on Monday, Home Affairs Minister Anders Ygeman said that Sweden "must not let the dark forces win".

Following the publication of the latest issue on Wednesday, The Local chatted to Swedish Muslims about what they thought about the magazine's contentious cartoons, with many appealing for peaceful reactions.

The attacks prompted a strong reaction from Germany – from both ends of the spectrum.

While many used the attacks to promote freedom of speech, for others it appears to have fuelled anti-Islamic sentiment with 57 percent of Germans saying they felt Islam was a threat in a poll.

And on Monday night, despite counter-demonstrations, a record 25,000 people marched for Pegida, a group opposed to what it calls the 'Islamization of the West'.

On Tuesday however, German President Joachim Gauck sought to reassure the country's Muslim population, telling them "We are all Germany".