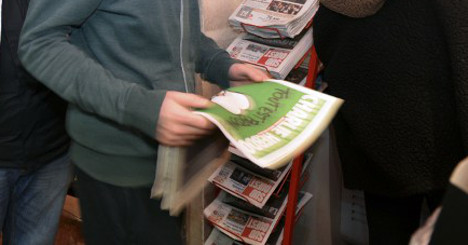 While the cover featured Muhammad, cartoonists at Charlie Hebdo used the inside pages to mock the gunmen who killed their colleagues. Photo: AFP

Charlie Hebdo's new edition out Wednesday mocks the Islamist gunmen who murdered many of its staff last week, but also skewers other targets with its usual brand of satire and caricatures.

The issue was put together by surviving staff in a show of defiance, to show it will not be silenced.

After the cover, which features a cartoon of the Prophet Muhammad holding a "Je suis Charlie" ("I am Charlie") sign under the title "Tout est pardonné" ("All is forgiven") are 15 pages of articles and drawings.

The surviving staff members of Charlie Hebdo held a press conference on Tuesday, where they said the gunmen "simply didn't have a sense of humour".