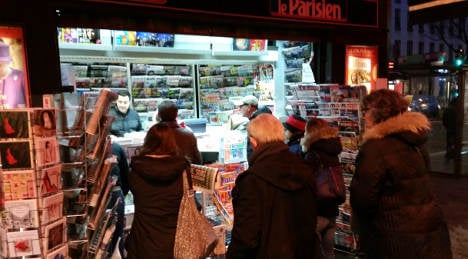 Disappointed customers, hoping to get their hands on Charlie Hebdo are turned away from a news stand in Paris. Photo: The Local

As newspaper kiosks around Paris put up "sold out" signs, it was announced that an extra two million copies of the newspaper will be printed to meet demand.

Newspaper kiosk owners reported they had queues of people waiting to get their hands on a copy by the time they opened up.

A total of 700,000 issues of the magazine, which was the victim of a deadly Islamist killing a week ago, were distributed early Wednesday but other copies of the magazine will be made available for sale throughout the week.

Charlie Hebdo contributor Patrick Pelloux tweeted his thanks to everyone who bought a copy and said more would become available.

"There was a queue stretching around the corner from about 6am this morning. After a few minutes they were gone," one kiosk owner at the Juares in the 19th arrondissement told The Local as he turned disappointed customers away.

"We're hoping we'll get another delivery tomorrow," he said.

Another woman working at a newspaper kiosk in Paris told AFP: "It was incredible. I had a queue of 60-70 people waiting for me when I opened. I've never seen anything like it. All my 450 copies were sold out in 15 minutes."

The front cover shows a cartoon of the Prophet Mohammed holding a sign that says "Je suis Charlie" ("I am Charlie"), the slogan taken up by millions of supporters around the world after 12 people were gunned down in an attack on the magazine's Paris offices.

Around three million copies have been printed, which dwarfs the normal print run of around 60,000 copies, and the edition will also be available in English, Spanish, Italian, Arabic and Turkish.

The paper said on Wednesday however that the another two million copies will be distributed to meet demand, not just in France but around Europe.

Contrary to what was previously announced, no copies of the special edition of Charlie Hebdo were available in French-speaking Switzerland on Wednesday morning, Swiss broadcaster RTS reported

Within hours of the edition coming out there were reports of copies being sold on eBay for hundreds of euros.

Many people who were disappointed at not being able to get their hands on a copy told The Local they had never bought the magazine before but wanted to show their solidarity with those who were killed.

"The more we buy, the stronger we are and the stronger the message is that we send to the people who carried out these attacks," one student named Elise, told The Local.

Another woman named Carole said: "I wanted a copy for symbolic reasons and to show solidarity with the movement that we have seen in France in the last few days."

Another disappointed customer named Brigitte dismissed the idea that the magazine should not have depicted the Prophet Muhammad on the front cover.

#CharlieHebdo sold out in most newsagents – here at Paris Orly airport pic.twitter.com/lwq1CzEi68

"It's not a question of angering Muslims. We live in a secular country. If they don't like secularism, does that mean we all have to be secular?

"It's bizarre to think that the drawing is an insult, if they were really religious they wouldn't believe that a drawing can depict the prophet."

Although this week's edition of Charlie Hebdo features just one cartoon of Muhammed, the paper does include several drawings mocking jihadists.

The magazine will also feature cartoons penned by the murdered artists. Other drawings mock the two Islamist gunmen who carried out the attack, reported the AFP news agency, which has obtained an advance copy of the magazine.
One image shows the gunmen arriving in paradise and asking after the 70 virgins, only to be told that "They're with the Charlie team, losers.".

Money from sales will go to the victims' families.

Muslim leaders in France, many of whom believe any depiction of Muhammad is sacrilegious, had called for calm ahead of the release of the paper.

The French Council of the Muslim Religion and the Union of French Islamic Organizations released a statement asking the Muslim community to "stay calm and avoid emotive reactions that are incompatible with its dignity … while respecting freedom of opinion."
Ahmed Miktar, the Imam at the Villeneuve d'Ascq mosque near Lille in northern France, told The Local he was "really shocked" by the new issue, but that he has called for people to keep calm.
"Mocking the most precious person for you is a lack of respect. If they were mocking Jesus or Marianne, it would also be a lack of respect," he said.
"But it's Charlie Hebdo's right to be able to express itself. We are asking for a pacified reaction and for people to keep calm," he added.
READ MORE: Muslims in France react to Charlie Hebdo cartoon