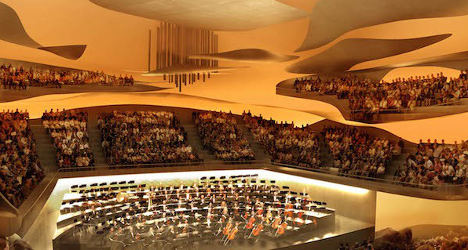 The ultra-modern, multi-layered, crested structure was designed by leading French architect Jean Nouvel and is located in the northeast of Paris. Photo: Philharmonie de Paris

The ultra-modern, multi-layered, crested structure, designed by leading French architect Jean Nouvel and planted in the northeast of the French capital, would not look amiss in a glittering, modern desert city like Doha or Dubai.

The stage of its main, 2,400-seat concert hall is enveloped by the audience, with sweeping, curved balconies surrounding it on all sides, designed to give concertgoers both better views and acoustics.

This is La Philharmonie, Paris's new, bigger home for orchestral events. It's an ambitious bid to retain the city's standing in a world where emerging nations are increasingly building their own massive temples to culture.

"It's utterly right that Paris should have a big auditorium for classical music," the director of the Paris Opera, Stephane Lissner, said.
Wednesday will see its opening with a gala concert attended by French President Francois Hollande. His presence after last week's carnage by Islamist gunmen in

Paris and resulting massive weekend rally is a testament to the importance of the concert hall, both financially and in terms of prestige.

The project took eight years and 386 million euros ($455 million) to build — a budget blown out to three times its initial estimate by inflation, its inherent complexity and a desire to make it a lasting monument like the capital's 37-year-old Pompidou Centre or France's National Library (Bibliotheque Nationale) opened in 1996.

Yet even now, despite the efforts of 600 workers toiling day and night to meet the government deadline, La Philharmonie is not entirely finished.

Nouvel said "several months" would be needed for the final touches to be complete. But once they were, "it will be one of the most remarkable symphonic buildings existing".

The rush to get the concert hall operational has meant everything might not be quite the way it should be for the VIP opening-night crowd.

"You must not judge the acoustics from the first concert," warned Paris Orchestra director Bruno Hamard. "Even a Stradivarius must be tamed."

He added: "Most probably, the result will be very good. But it will become exceptional with time."

The main hall's acoustics were designed by two masters in the field: New Zealand's Harold Marshall and Japan's Yasuhisa Toyota.

The idea to have the stage surrounded by seats, like in Berlin's Philharmonie, is to have the farthest spectator just 32 metres (105 feet) from the orchestra conductor instead of 47 metres in Paris's Salle Pleyel, located on the other side of the city near the Champs-Elysees and until now the premier concert hall in Paris.

The decision to put the new Philharmonie in Paris's northeast 19th arrondissement, a still largely working-class area rapidly becoming a trendy neighbourhood, was for various reasons.

Space — a rare commodity in Paris — was available in the Villette park there, where it will be part of the existing Cite de la Musique complex, and it is close to Paris's top Conservatory of music training future talent.

Perhaps more importantly, though, is the geographical outreach to younger French people who feel excluded from concerts by the elite, much older crowd that usually attend.

To that end, Philharmonia tickets are to be sold much cheaper than had been the case when orchestras played at the previous halls in central Paris. The building was also designed so people could walk up on its roof.

Next weekend the public will be able to discover the new Philharmonie on free open days.

"To be honest, Paris had some grand, historic concert halls. But the Philharmonie promises a peerless live experience in terms of acoustics," said Douglas Boyd, the British conductor who in July will take up the baton over Paris's Chamber Orchestra at the Philharmonie.