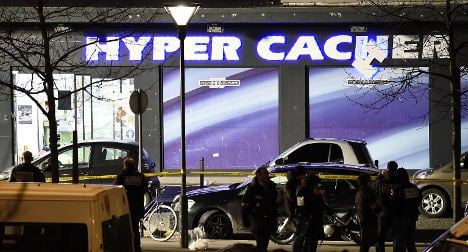 "Coulibaly was faster and he shot him in the throat," the woman said of the murder of one of the hostages in the kosher market in eastern Paris. Photo: Eric Feferberg/AFP

She had watched as a man inside the kosher market in eastern Paris snatched a gun when Coulibaly put it down for a moment and tried to turn it on the attacker.

"A young man took the assault rifle and wanted to shoot him," but Coulibaly "was faster and he shot him in the throat. The poor young man just fell," the woman, who gave her name only as Sophie, told Europe 1 radio.

She said Coulibaly dealt ruthlessly with another hostage.

"Someone wanted to leave — he shot him in the back," she said.

Sophie had walked up to the store in the Porte de Vincennes area to do her shopping at around 1.00 pm (1200 GMT) on Friday when she spotted a dead body slumped on the floor at the entrance.

"By the time I realised what had happened, I raised my head and I saw the terrorist who told me: 'Come in here, right now!'" she said.

"I couldn't back up, I was totally in the entrance and I had to go in," she said. "I felt like I was in a bad movie."

While the ordeal was underway, Coulibaly ordered Sophie to go to the basement and round up customers who had run down there.

An employee named Lassana Bathily, who is a practicing Muslim, had helped some of the terrified shoppers hide in a refrigerator in the store.

Coulibaly ordered Sophie to go and bring the people upstairs. They included a three-year-old boy and his father — she said telling them in particular to go back into danger was "horrible."

"We couldn't manage to get the other cold storage area open. They were silent," she added. "I said: 'Forget about it, we'll say there was nobody in there.'"

It was not her only act of bravery. Sophie also told how she talked the father of the boy out of trying to attack Coulibaly with a fire extinguisher.

"In the stairway the father of the boy walked up with a fire extinguisher. He told me: 'I pulled the pin out. I'm going to spray him with it.'"

"I said: 'You'll do no such thing. He just killed someone in front of me. You're not doing that!'"

And then, with almost no warning, the ordeal came to an end as police stormed the supermarket and shot dead Coulibaly.

"It went crazy all of a sudden. We all rushed away, tried to hide ourselves somewhere … Little by little, the metal shutter was going up and then I thought, 'We have go that way, we have to get out of here.'" 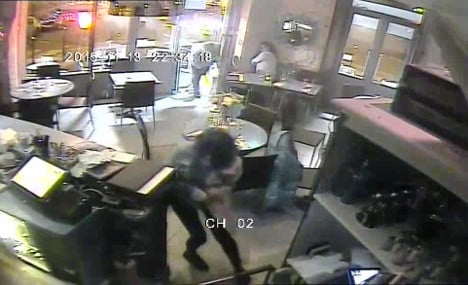