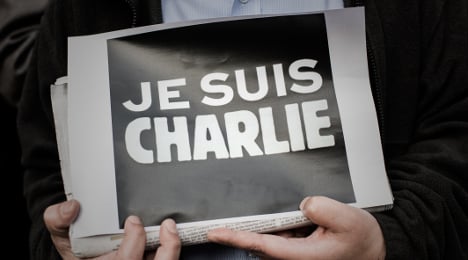 The slogan Je suis Charlie (I am Charlie) has become a symbol of solidarity after the attacks. Photo: AFP

The cover of the first edition of the French satirical weekly Charlie Hebdo since its staff were murderously attacked by Islamist gunmen last week shows a cartoon of the Prophet Muhammad crying and holding up a "Je suis Charlie" sign under the words: "All is forgiven".

The front page was released to media ahead of the magazine's publication on Wednesday, which The Local has decided not to reprint. Three million copies of the special "survivors' edition" are being printed and will be made available in 25 countries, translated into 16 languages because of international demand.

Worldwide sympathy and "Je Suis Charlie" solidarity rose up around Charlie Hebdo in the wake of the attack against it last Wednesday, in which 12 people were killed including five of its top cartoonists.

But the magazine's fresh caricature of Muhammad could renew fury by some extremely devout Muslims who believe it is forbidden to depict their prophet in any way.

The two gunmen who attacked Charlie Hebdo's offices in Paris last Wednesday said as they left the scene that they had "avenged the Prophet Muhammad".

The staff first started receiving death threats in 2006 when they republished cartoons by a Danish newspaper, Jyllands-Posten, that had triggered violent riots in some Muslim countries.

The offices of the weekly were firebombed by suspected Islamists in 2011 when it published other cartoons making fun of Muhammad, causing no injuries.

The surviving employees of Charlie Hebdo have sworn to uphold its tradition of lampooning all religions, politicians, celebrities and news events. Islamic extremists have often been ridiculed in its pages through provocative and irreverent cartoons.

We will "cede nothing" to extremists seeking to silence them, the publication's lawyer, Richard Malka, told French radio on Monday.

"In each edition for the past 22 years there has not been one where there have not been caricatures of the pope, Jesus, priests, rabbis, imams ou Mohammed," he said.

It would have been "surprising" if a Mohammed cartoon did not feature in the new issue, he said.

He stressed that Charlie Hebdo saw itself as "not a violent newspaper but an irreverent one".

Working out of rival newspaper

The surviving Charlie Hebdo staff have since Friday been working out of the offices of another French newspaper, Liberation, with equipment loaned by other media organisations.

Their own blood-soaked offices remain sealed by police, with the entrance covered with flowers, pencils and candles in tribute to the dead.

The gunmen who had attacked Charlie Hebdo, brothers Cherif and Said Kouachi, claimed to belong to the jihadist group Al-Qaeda in Yemen.

Parisians have flocked to the offices of Charlie Hebdo to pay their respects. Photo: The Local

They were killed on Friday, as was an accomplice claiming affiliation to the rival Islamic State group, Amedy Coulibaly, in separate but coordinated French commando raids on sites in and near Paris where they had taken hostages.

In all 17 people and the three Islamist attackers were killed in three days of violence.

The 44-year-old Charlie Hebdo newspaper had been sliding towards bankruptcy before the attack against it. It used to typically sell only half of the 60,000 copies it printed weekly.

But since gaining worldwide notoriety, it has earned pledges of support from the French government and media groups.

With the attacks, the magazine has become a national symbol of free speech.

Huge crowds, including 1.5 million in Paris in the biggest rally in French history, took to the streets Sunday, many carrying signs saying: "Je suis Charlie".