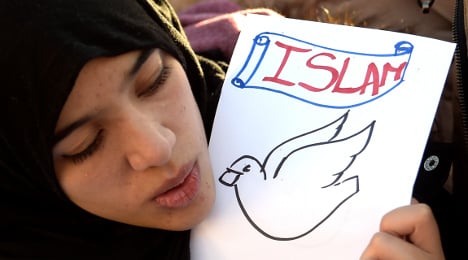 A muslim woman marches in the aftermath of the Charlie Hebdo murders, which will once again depict the Prophet Muhammad on its cover this week.Photo: AFP
The offices of the Charlie Hebdo magazine were attacked last week by two Islamic extremists, who murdered 12 people in a bloody rampage that has traumatized the nation.
On Tuesday, surviving staff members announced that three million copies of the newest issue would be printed on Wednesday, compared to the usual 60,000 printed each week.
The cover will feature a cartoon of the Prophet Muhammad, a move certain to cause anger and dismay for Muslims, given that it is considered sacrilegious to depict the prophet Muhammad.
The French Council of the Muslim Religion and the Union of French Islamic Organizations released a statement asking the Muslim community to "stay calm and avoid emotive reactions that are incompatible with its dignity … while respecting freedom of opinion."
Ahmed Miktar, the Imam at the Villeneuve d'Ascq mosque near Lille in northern France, told The Local he was "really shocked" by the new issue, but that he has called for people to keep calm.
"Mocking the most precious person for you is a lack of respect. If they were mocking Jesus or Marianne, it would also be a lack of respect," he said.
"But it's Charlie Hebdo's right to be able to express itself. We are asking for a pacified reaction and for people to keep calm."
He added that he thought the Muslim community was at risk after the shootings, and that the French government should ensure the same security measures for the Islamic community as it has put at the disposal of France's Jewish population.
"I am calling for the creation of a France proud of being able to express itself and to respect one another. We are all united with our citizens," he concluded.
SEE ALSO: French Muslim leaders slam 'odious' attacks The head of a big mosque in central eastern Paris, Hammad Hammami, voiced a similar stance.
"We don't want to throw oil on the fire," he said. "We consider these caricatures to be acceptable. They are not degrading for the Prophet," unlike previous Charlie Hebdo cartoons.
People The Local spoke to in the Muslim community of Paris had mixed reactions to the new issue, which will be available in a handful of different languages including English.
Muhammad, who works in a deli in northern Paris, was upset when he was shown an image of the new cover.
"I'm shocked," he said. "The Muslims disagree with this picture because the prophet cannot be represented in any way."
As he spoke, a female customer called Onel Güller interjected, saying that the Koran forbids anyone to depict the prophet.
"But I feel safe and I don't think people in this neighbourhood feel they're in danger," the 36-year-old woman added.
The Muslim woman continued: "The problem comes from the fact that people feel they are not being respected.
"Listening to what everyone has to say is important. France has to acknowledge the fact that it is a multicultural country. People must start thinking differently. Freedom of expression comes first."
Other members of the community were less concerned. A Muslim butcher by the name of Massi in the 19th district of Paris said he was unfazed.
"I don't care about the cover, they can do what they want," he told The Local.
"The Muslim community isn't in danger, I don't think I am or my family."
Another butcher, Sliman in the 17th arrondissement, said the latest Muhammad cartoon wasn't as provocative as some of their previous efforts.
"This picture isn't shocking. It is actually 'clean' compared to the previous ones they've drawn. You can't say it's obscene. It almost makes me want to cry – it's touching," he said.
It is not just Muslims in France that have been reacting to the front cover of Charlie Hebdo.
Egypt's Islamic authority, Dar al-Ifta, has denounced the cover.
"This action is an unjustified provocation against the feelings of 1.5 billion Muslims," it said, according to AFP.
One of the fiercest criticisms of the Muhammad front page came perhaps expectedly from within Iran, an Islamic republic notorious for throwing many journalists in jail.
"Charlie Hebdo has again insulted the Prophet," the conservative news website Tabnak asserted, next to a blurred image of the cover.
In Sweden, some members of the Muslim community said the new cover of Charlie Hebdo was provocative and "hurtful to Muslims".
"But as Muslims we must be careful with our reactions, we must simply not acknowledge them or give them attention, because that is what they want," a man called Soheib told The Local Sweden.
by Priscillia Charles
To limit the overwhelming burden on our moderators, it will not be possible to comment on this article. Feel free to join the conversation on our Facebook page.