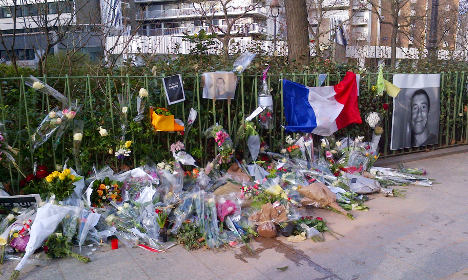 Flowers outside the offices of Charlie Hebdo in Paris. Photo: AFP
Fritz-Joly Joachin, 29, a French citizen of Haitian origin, "was in contact several times with one of the two brothers — Cherif Kouachi," public prosecutor Darina Slavova told AFP.
She said the contact took place before Joachin left France on December 30th, a week before Cherif Kouachi and his brother Said killed 12 people in Paris attacks that shocked the world.
Joachin was initially wanted on a European arrest warrant issued by France following allegations by his wife that he had kidnapped their three-year-old son.
But on Monday, Bulgarian prosecutors received a second European arrest warrant for Joachin issued by a court in Paris.
"The charges are for participation in an organised crime group whose aim was organisation of terrorist acts," said Slavova.
The Kouachi brothers carried out their massacre at the Paris offices of French satirical weekly Charlie Hebdo on January 7th. Two days later they were shot dead by French security forces.
Separately Amedy Coulibaly, who had links to the brothers, shot dead a policewoman on January 8th and the next day four Jews in a kosher supermarket in Paris before also being killed by police.
According to Joachin's wife, Joachin converted to Islam 15 years ago and turned radical two years ago. She said he planned to take their child to Syria to educate him in a jihadist community.
Joachin told prosecutors however that he was travelling with his son and girlfriend just for a holiday in Istanbul, and Bulgarian media quoted him as denying being an extremist.
"I am Muslim but I am not a radical or terrorist," the Presa newspaper quoted him as saying.
An extradition hearing is due to take place on Friday. On Monday he had said he would not contest his extradition back to France.
Bulgarian Interior Minister Veselin Vuchkov said Tuesday that EU citizens can easily cross over Bulgaria's border into Turkey, and then into Syria to join Islamic State (IS) militants, if Bulgarian authorities are not alerted by their home countries.
"Many hundreds of citizens of the EU, with absolutely valid documents and without any security alerts about them, can easily cross Bulgaria's territory," he said.
To limit the overwhelming burden on our moderators, it will not be possible to comment on this article. Feel free to join the conversation on our Facebook page.
Url copied to clipboard!