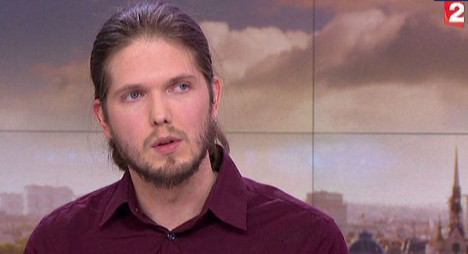 Lepere kept completely still in his hiding hole as he heard one of the Kouachis approach. Screengrab: France 2

“I want to thank my boss, he was the one who gave the necessary seconds of warning for me to hide,” the 26 year old told French station France 2 on Monday with tears in his eyes.

“The first thing he told me was ‘they have kalachnikovs'.

“From the moment I hid, all I had was my hearing to go by.”

Squeezed into a cupboard under a sink in the office canteen, in “foetal position” as he describes it, Lepere kept completely still as he heard one of the Kouachis approach.

“One of them came into (the canteen) and opened the cupboard next to mine.

“He then poured a glass of water from the sink just above my head, he was about 50 centimetres away from me.”

Lepere held his breath as he heard the water flowing through the pipe and into a glass in the hand of one of the Kouachis.

Despite being gripped by fear, the young graphic designer knew he had to take action somehow.

“But you have to take risks sometimes.

“My first instinct was to put my phone on silent to avoid vibrations,” Lepere explained, as he had already received ‘noisy’ text messages from family trying to reach him.

His brother-in-law was with the police, allowing Lepere to pass on key information about the hostage takers’ whereabouts and the situation at the printing house.

“It lifted my spirits. I shed my first tears and was shaken (but) I was able to pass on as much information as possible to the GIGN (France’s special police intervention unit).”

“I am hidden on the first floor. I think they have killed everyone. Tell the police to intervene,” he wrote in one message.

He could also hear the suspects talking, which both helped reassure him and gave him more information to send to the GIGN.

By the time police outside the printing business in Dammartin-en-Goele(30km north of Paris) launched their sting operation, Lepere was in “a great deal of pain, in my legs, my buttocks, my back, everywhere”.

And still he described the feeling of “liberation”, offering his most sincere condolences to the families of the victims, “those who didn’t have the chance”.

The siege ended when Cherif and Said Kouachi burst out of the building with guns blazing before being shot dead by GIGN.

The Kouachi brothers, who killed 12 people during their attack on satirical week Charlie Hebdo, never knew of Lepere’s existence.