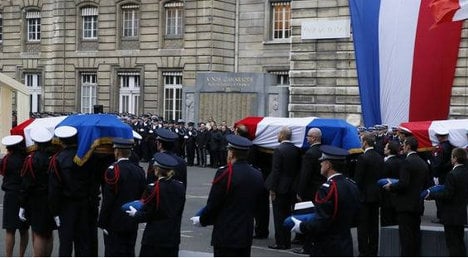 Hollande lead the service at the Prefecture de Police in Paris on Tuesday in the presence of ministers, hundreds of police officers as well as the families of those who were killed.

Draped in the red, white and blue of France's flag, the coffins of three police officers killed during the attacks were carried at the solemn ceremony as uniformed colleagues lined a large square of the police headquarters in Paris.

Hollande laid the Legion d'honneur medal on coffins draped in the French flag as the grieving families looked on and the national anthem rang out at the Paris police headquarters.

"They died so that we could live in freedom," Hollande said during an emotional ceremony.

"They died carrying out their duty with courage, bravery, dignity. They died as police officers."

"I assure you that the whole of France shares your pain," he told the victims' mourning relatives.

The fallen officers:
– Franck Brinsolaro, 49, husband to a journalist and father of two. He had been tasked with protecting cartoonist Charb for several years, and was killed outside the offices of Charlie Hebdo. His twin brother, also a policeman, was among those who paid tribute last week.
– Ahmed Merabet, 40. He was killed outside the offices of Charlie Hebdo on Wednesday after one of the Kouachi brothers shot him at point blank range while he was on the ground, apparently wounded. His parents emigrated from Algeria to France in 1955.
– Clarissa Jean-Philippe, 26, only joined the police force in 2013. She was shot dead when responding to a callout for a traffic accident in the suburb of Mountrouge. The attack was linked to Amédy Coulibaly, who soon after killed four in a hostage drama in the city's east.