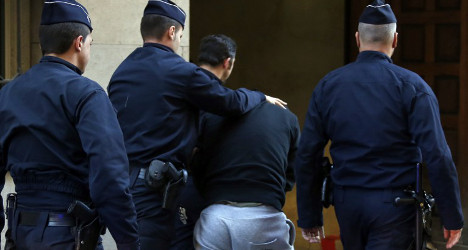 The longest sentence so far was handed to a man who told police they "would be the next victims" of a terror attack. The judge gave him four years. Photo: Valery Hache/AFP

Over the same period, some 15 cases were opened over graffiti on mosques, and 10 for degrading Muslim places of worship "with weapons, fire or explosions".

The longest sentence so far was handed to a man in the northern French city of Valenciennes on Tuesday after he was found guilty of telling police “there should be more Kouachis. I hope you’re the next (victims)”.

According to France Info, he was sentenced to four years behind bars.

All over France judges are putting France’s recently approved Anti-Terror Act to use, a law spearheaded by Interior Minister Bernard Cazeneuve and geared primarily at stopping terrorists and their sympathizers from condoning barbaric acts and attracting new recruits to their cause on the internet.

In Toulouse, southern France, three men between the ages of 20 and 25 received ten-month jail terms after they applauded the murder of 17 people during last week’s attacks.

“The Kouachi brothers are only the first ones, I should have been with them so we could have killed more people,” one of the accused was reported as telling tramway security in the city in southern France.

French authorities are also concerned about the high volume of altercations in schools across the country during the minute of silence held for the victims of the Charlie Hebdo and Kosher supermarket massacres.

Out of the 70 incidents they recorded, the words of a 15-year-old schoolgirl who interrupted the homage are perhaps the most disturbing.

“They succeeded, I’m proud of them and their killings, they’re my brothers”.

Another 16-year-old is recorded as shouting jihadi threats against all “whites”.

In Orleans a young man was handed a six month jail sentence for shouting "Long live the Kalashnikov" at a group of police officers in the city.

He was also ordered to pay €200 in compensation to each of the four police officers. He claimed he was drunk at the time, admitting that it was a stupid thing to say.

French prosecutors said on Monday they were also investigating notorious comedian Dieudonné, who is accused by critics for being anti-Semtic, for "inciting terrorism" with a Facebook comment that could be interpreted as sympathizing with one of last week's attackers in Paris.

"Tonight, as far as I'm concerned, I feel like Charlie Coulibaly", the comedian wrote, combining the expression "Je suis Charlie" ("I am Charlie") with a reference to Friday's kosher supermarket attacker Amedy Coulibaly.

READ ALSO: Twitter disgust over 'I am Kouachi' hashtag

“We can’t back down an inch,” public prosecutor Patrice Michel told AFP.

“It’s the first time we’ve applied the law of 14 of November 2014 in our fight against terrorism.”

Dubbed the “French Patriot Act” by its opponents, the bill received the support of a majority of lawmakers in the Senate but was deemed “anti-democratic” by civil rights groups and some political parties who were wary of the extended powers it granted the government.

Among its most controversial clauses are a travel ban on suspected would-be terrorists and the power to block websites thought to be promoting terrorist acts, without a prior court order.

"La Quadrature du Net", a French association that defends online rights, slammed the bill as "unsuitable and dangerous", calling for parliamentarians to take it to the Constitutional Council, which ensures that the French constitution is respected.

All this criticism came before the worst terror attacks France has seen in more than 50 years, so opinions and doubts over the divisive legislation have more than likely been silenced, at least for now.

With tensions running high in a France desperate to avoid further attacks, the lines between genuine terror speech and offensive rhetoric could become blurred.

But Michael Wacquez, lawyer of a man who was imprisoned in Strasbourg for glorification of terrorism for expressing support for the Kouachi brothers, pointed out the problem French authorities now face.

"There are 40,000 tweets out there expressing support for the terrorists," he told AFP. "What are we going to do with all these people? Are the French prisons ready to take in 40,000 people, because they made a bad joke on Twitter?"