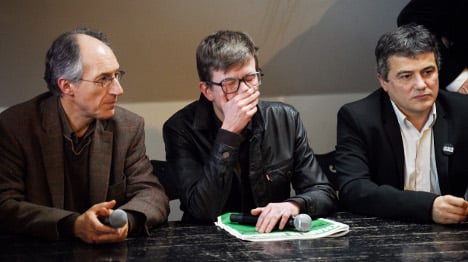 Gérad Biard, Luz and Patrick Pelloux talk to the media ahead of the release of Charlie Hebdo tomorrow. Photo: AFP
Three of the surviving members of the Charlie Hebdo team faced the world's media on Tuesday ahead of the publication of their new edition which features a cartoon of Muhammad on the front.
Holding up a copy of the new edition, which features a crying Muhammad holding a "Je suis Charlie" sign under the words "All is forgiven", cartoonist named Luz said the team had no doubt about depicting the prophet on the front cover.
"We trust in people's intelligence and in their humour and irony," he said.
Referring to the two gunmen who killed eight members of his team including the editor Stephane Charbonnier, Luz said they simply "lacked a sense of humour".
This week's post-attack edition of the French satirical magazine Charlie Hebdo will be made available in six languages including English, Arabic and Turkish, the chief editor said Tuesday.
Only the French, Italian and Turkish versions will be printed, however, while the other three — English, Spanish and Arabic — will be offered in electronic form, editor-in-chief Gerard Biard told a Paris news conference.

This was the scene at the Charlie Hebdo press conference earlier. Just a bit of interest from the media pic.twitter.com/Qe9pZIQ42x

Biard, told reporters: "We are happy to have made this edition, to have succeeded,"
"We wanted to find something that says something about us, and something about what has happened."
The cover of the new edition has made headlines already ahead of its Wednesday publication.
"This wasn't the front page the world wanted us to do, but it's the one we wanted. It's just a character crying. The Muhammad we painted is, above all, a figure that is crying," said Luz before Biard grabbed the microphone and said "Our Muhammad is a lot more likeable than the Muhammad that the terrorists brandish."
He urged people in France and beyond to continue supporting the world's press, as it would allow a continued victory in the fight for the freedom of speech.
"When you buy newspapers and magazines, we really have won. When we can bring paper, ideas, and cartoons to life across the world, then we really have won."
The new edition will run 3 million copies, far more than the usual print of 60,000. It will be on sale for two weeks, after which the magazine will continue as normal.
The magazine will also feature cartoons penned by the murdered artists. Other drawings mock the two Islamist gunmen who carried out the attack, reported the AFP news agency, which has obtained an advance copy of the magazine.
One image shows the gunmen arriving in paradise and asking after the 70 virgins, only to be told that "They're with the Charlie team, losers.".
The press conference was held amid tight security at the offices of French newspaper Liberation, who have taken in the rest of the Charlie Hebdo team.

Tight security at a press conference for Charlie Hebdo this afternoon. As you would imagine. #CharlieHebdo pic.twitter.com/diVOlBXcpV