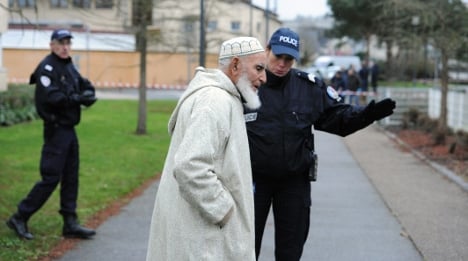 A policeman directs a man away from a mosque in Le Mans where shots were fired and three blank grenades were thrown last week. Photo: Jean-Francois Monier/AFP

The council, which monitors Islamophobic attacks in France, reported on Monday that there have already been scores of possible reprisal attacks on the country's Muslim community.

Since Wednesday, when Islamic terrorists killed 12 people at the Charlie Hebdo offices in Paris, over 50 anti-Muslim incidents have been reported.

The incidents included 21 reports of shooting at Islamic buildings and the throwing of some form of grenades, and 33 threats, a spokesman for the monitoring body at the Central Council of Muslims in France said.

"The reality of discrimination is catching up with us," he told The Local on Monday.

"Muslims are scared. I'm scared for my mother, my sister. I live in a working class neighborhood and I would have never imagined that such things could happen."

"We don't feel like any measures are being taken to secure Muslim places of worship or to try to find the people responsible for these acts."

While he said Muslims have been on the receiving end of positive messages of solidarity on social media, he added that "the national unity" on Sunday only lasted for the duration of the demonstration.

France must act in a "firm" manner, he concluded.