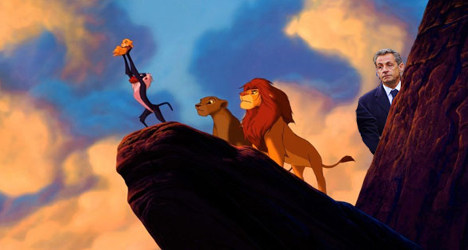 Sarkozy has been photoshopped into the famous scene from the Disney movie "Lion King". Photo: Tumblr

Former French president Nicolas Sarkozy was the butt of Internet jokes on Monday after he managed to shimmy his way to the front of the historic march in Paris on Sunday.

A bunch of photo-shopped images of the former leader popping up in world events started appearing on the web within hours of the march, complete with the hashtag #JeSuisNico.

There he is at the fall of the Berlin Wall.

And who's that behind the victorious French team from the 1998 World Cup?
It's Nico!

Sarkozy, who has recently returned to politics as head of the right-wing opposition UMP party, initially found himself a few rows back from the line of world leaders gathered for Sunday's march against terrorism that is considered the biggest rally in modern French history.

He managed however to subtly make his way forward with a few nifty manoeuvres captured in a series of photographs.

He also gets a cameo in the Lion King, on a Bob Dylan cover and alongside the cast of "Friends".