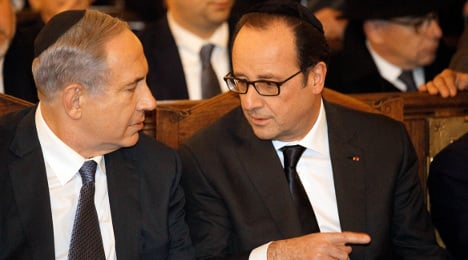 Israel's Prime Minister Benjamin Netanyahu and French President Francois Hollande attend a ceremony at the Grand Synagogue in Paris on Sunday. Photo: AFP
The same message was conveyed to Palestinian president Mahmud Abbas in a bid to avoid the commemoration of the 17 people killed in Islamist attacks in the French capital last week being clouded by the Middle East conflict, the reports said.
But when Netanyahu rejected the appeals of the French government, Abbas was swiftly invited, Channel Two television and Israeli newspapers reported.
President Francois Hollande had wanted to "focus on solidarity with France, and to avoid anything liable to divert attention to other controversial issues, like Jewish-Muslim relations or the Israeli-Palestinian conflict," the liberal Haaretz newspaper reported.
There was also concern Netanyahu would use the event to "make speeches" as he prepares for a general election on March 17th, in which he is seeking a fourth term.
The request to stay away was made by Hollande's national security adviser, Jacques Audibert, to his Israeli counterpart, Yossi Cohen, and was initially accepted, Haaretz reported.
But on Saturday evening, the rightwing prime minister's hardline rivals in the governing coalition, Foreign Minister Avigdor Lieberman and Economy Minister Naftali Bennett, announced they would travel to Paris.
"When Netanyahu heard they were going, he informed the French he would be attending the march after all."
Haaretz said that the prime minister's actions had infuriated the French president, who had demonstrated his "anger" at a ceremony at Paris's main synagogue to commemorate four Jews who were among those killed.
"Hollande sat through most of the ceremony, but when Netanyahu's turn at the podium arrived, the French president got up from his seat and made an early exit."
'Embarrassing'
The mass circulation Yediot Aharonot newspaper also reported the apparent snub to the Israeli premier.
"Before Netanyahu began his speech, President Hollande left with his entourage… The impressive delegation of leaders from the Muslim community who attended the ceremony also chose to leave. They all, apparently, had prior commitments."
Netanyahu's conduct was widely criticised by Israeli commentators.
"It was embarrassing, not to say disgraceful, to see Israel's prime minister yesterday trying to push his way onto a bus that he was not supposed to board, making his way determinedly from the second row (where he was placed) to the row of leaders walking in front (which he took over), behaving in a mourning parade as in an election rally," Ben Caspit wrote in the rightwing Maariv newspaper.
"The reprisal was not late in coming. President Francois Hollande fell on Abu Mazen's (Abbas's) shoulders in a close embrace but greeted Netanyahu with a frozen hand."
France angered Israel late last month by voting in support of a draft UN Security Council resolution on Palestinian statehood that would have set an end-date for Israeli occupation.
The text failed to secure the nine votes necessary to be adopted in the 15-member council but Israel called in the French ambassador to protest.