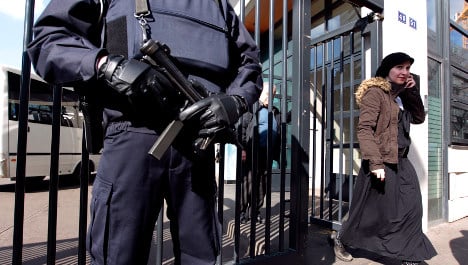 Security was also tightened outside Jewish schools in 2012 following following the attack by Mohamed Merah on one in Toulouse that left three dead. Photo: Kenzo Tribouillard/AFP

Bernard Cazeneuve said soldiers would also be posted as reinforcements, as he addressed parents of a Jewish school to the south of Paris, near where an Islamist gunmen shot dead a policewoman on Thursday, one of 17 people killed in a three-day bloodbath.

The news comes just a day after French President Francois Hollande reassured the country’s Jewish community that Jewish schools and synagogues will be protected by the French army “if necessary”.

"He told us that all the schools, all the synagogues will be protected, if necessary, on top of the police, by the army," said Roger Cukierman, president of the Representative Council of Jewish Institutions in France.

Hollande also said he would visit the Grand Synagogue of Paris after a march to mark this week's jihadist attacks in the capital.

Four of the fatalities in France's three-day wave of violence were Jews killed in an attack on a kosher supermarket hours before the start of the Jewish Sabbath on Friday.

"To all the Jews of France, all the Jews of Europe, I would like to say that Israel is not just the place in whose direction you pray, the state of Israel is your home," he said in a statement, referring to the Jewish practice of facing Jerusalem during prayer.

The attacks come almost three years after Mohamed Merah shot dead a rabbi, three Jewish children and three French paratroopers, before being killed during a stand-off with police at his home.

Following the attacks, the French interior minister also ordered security to be tightened around all French Jewish schools.

The image below shows a map of deadly anti-Semitic attacks in France since the 1980's.