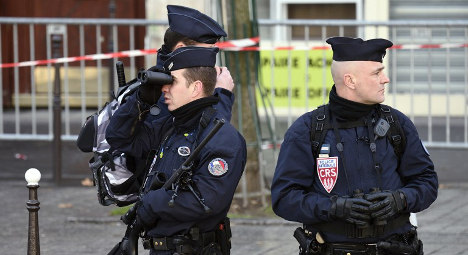 President Hollande will chair a crisis meeting on Monday to discuss security measures after the shootings. Photo: Eric Feferberg/AFP

President Francois Hollande will chair a crisis meeting with cabinet ministers on Monday to discuss security measures after the shootings raised questions about how the attackers slipped through the intelligence services' net.

All three gunmen — brothers Said, 34, and Cherif Kouachi, 32, and Amedy Coulibaly, 32 — had a history of extremism and were known to French intelligence.

Prime Minister Manuel Valls has admitted there were "clear failings" after it emerged that the Kouachi brothers had been on a US terror watch list "for years".

On Monday Valls announced that Coulibaly, who killed a policewoman in southern Paris then four Jewish shoppers in a hostage drama, "undoubtedly" had an accomplice. France's Prime Minister vowed to continue the hunt for whoever it was that helped Coulibaly.

Coulibaly was a repeat criminal offender who had been convicted for extremist Islamist activity.

Said was known to have travelled to Yemen in 2011, where he received weapons training from Al-Qaeda in the Arabian Peninsula, while Cherif was a known jihadist who was convicted in 2008 for involvement in a network sending fighters to Iraq.

All three were shot dead by security forces Friday after a reign of terror that targeted Charlie Hebdo magazine, a kosher supermarket and police.

The probe into the hostage siege in a Paris kosher supermarket has advanced with the weekend discovery of the possible hide-out of attacker Amedy Coulibaly, who is now a suspect in several strikes around Paris.

Coulibaly's DNA had already been identified at the sight of Friday's fatal shooting of a police officer in the southern Paris suburb of Montrouge.

A gun used in the supermarket attack has also been tied to bullets that seriously injured a jogger on Wednesday night in Fontenay-aux-Roses, the Parisian suburb Coulibaly resided in.

It's now thought that he may be connected to a booby-trapped car that exploded on Thursday evening in yet another area in the south of Paris.

Responsibility for that blast was claimed in an internet video posted on Sunday morning before being rapidly removed, attributing the hostage strike, Montrouge police murder, and car explosion to Coulibaly.

The 32-year-old had made a similar declaration in a telephone interview with BFMTV during the hostage seige that claimed the lives of four people.

"The brothers of our team, they did Charlie Hebdo," the man in the video says of the attack that left 12 people dead, two days before both Kouachis were killed in an exchange of gun fire with police who had surrounded them north-east of Paris.

Hollande has warned his traumatized nation to keep up its guard in the face of possible new assaults.

On Sunday he led more than a million people on a march in Paris intribute to the victims of the attacks as the crowd cried "Not afraid".

With so many world leaders also present, security in the still jittery capital was tight, with police snipers stationed on rooftops and plain-clothes officers among the crowd.

Ahead of the rally, interior and security ministers from the European Union and the United States held emergency talks to discuss Islamic extremism.

They urged a strengthening of the EU external borders to limit the movement of extremists between Europe and the Middle East, and said there was an"urgent need" to share air passenger information.