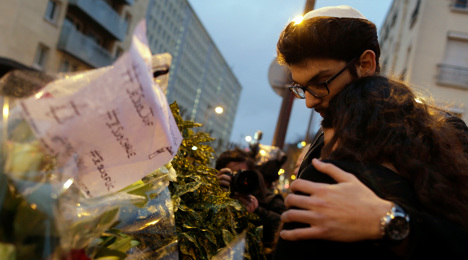 Mourners in Porte de Vincennes in eastern Paris, where four people were killed. Photo: AFP
Friday's shooting at a kosher supermarket in the east of Paris was the latest in a string of shocking anti-Semitic attacks in France.
In July last year, rioters targeted the Jewish community in Sarcelles, an area in Paris known as “little Jerusalem”. Businesses and cars were set ablaze, and police had to use force to stop pro-Palestinian rioters from approaching a synagogue.
In 2012 Mohamed Merah shook the Jewish community to its core when he shot dead a rabbi, and three Jewish children at a Jewish school before he was killed in a stand-off with police at his home.
In 2006, 23-year-old Jewish man Ilan Halimi was kidnapped from his home in the south of Paris and tortured for three weeks by a group called the Gang of Barbarians. He did not survive the ordeal.
After the latest bloodshed members of France's 500,000-strong Jewish community are not surprisingly afraid.
And Israel has noticed.
In a statement that would have riled the French government, the country's Prime Minister Benjamin Netanyahu has urged the Jews of France that Israel is their home and his government wants them to immigrate.
“All Jews who want to immigrate to Israel will be welcomed here warmly and with open arms. We will help you in your absorption here in our state that is also your state,” he said in the statement.
And in another symbolic move that may not sit well with French authorities the Jewish victims of Friday's shooting will be buried in Israel, where Netanyahu is expected to eulogize them in the presence of their families.
But while the French government and its president repeatedly try to reassure France's Jewish community, many will understandably feel tempted to emigrate to a country where they may feel safer.
Marc Knobel, who is a historian and the head of studies at France's Jewish umbrella organisation CRIF and an expert on anti-Semitism in France says for many in the Jewish community the French government simply does not have the resources to reassure them.
“In reality, many Jewish people will leave France because of they simply feel less safe,” he told The Local. “The Jewish community is traumatized and it's understandable,” Knobel continued. “Imagine the thought that you could go and buy a bottle of wine from a kosher supermarket and pay for it with your life.”
“Jews understand that it's impossible for France to put soldiers and police outside every Jewish grocery store. They understand it’s impossible to protect all the Jews in France. They may decide to go to Israel because they simply feel safer.” (Mourners lay flowers at a Jewish school where three pupils and a Rabbi were killed in 2012)
Thousands of Jews had already decided before Friday's shooting to make the permanent move to Israel.
According to CRIF a record 7,000 Jews emigrated from France to Israel in 2014. That figure put France at the top of the global league table for the number of Jews making a journey known as Aliyah.
While much has been made of those record numbers Knobel stresses that a variety of reasons can account for these figures – whether its students returning home after studying or the elderly choosing to retire in Israel.
But he says it's no coincidence that so many are choosing to leave and that Netanyahu's “come home” call is nothing new.
“There are Jewish people living in sensitive neighbourhoods where anti-Semitism has become a daily part of life for them. They feel uneasy. Some are scared to go the synagogue or put their children in Jewish schools because they feel something might happen,” he explained.
“Netanyahu persuading Jews to come to France is not new. It's a policy started by Ariel Sharon in 2002. They see it as logical where Jews are living in situations of peril to tell them to come to Israel,” he said.
But the French government is desperate not to lose its Jewish population.
President Francois Hollande says the Jewish community will be given the necessary protection and on Monday the PM announced that 5,000 police will be deployed to guard Jewish schools.
Knobel said the French government needs to make it clear once again they will not tolerate anti-Semitism and take the necessary measures to protect Jews living in France.
“The French government knows it's not good for the image of the country if Jews are leaving. It presents a real problem for the French society and the PM said himself that 'If the Jews leave France, France is not France'.”