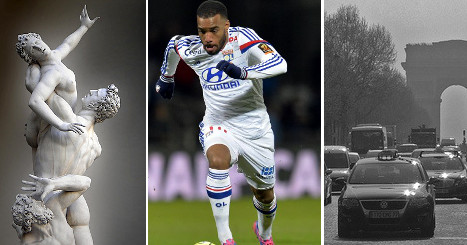 A 17th-century bronze statuette was stolen from its display in Paris’s world-famous museum on Saturday afternoon, only to be found soon after in the art gallery’s toilets.

Police believe a would-be thief got cold feet shortly after stealing the statuette of Samson and the Philistines, by Flemish sculptor Giambologna.

Said to be worth between €300,000 and €400,000, the costly masterpiece ended up in a bin in the toilets of Musée des Arts Décoratifs, in the western wing of Le Louvre.

Police say the frightened thief was captured by security cameras but hasn’t been arrested yet.

The bill, which is designed to bring France’s stagnant economy back to life, encompasses changes to several aspects of French economy and has caused a stir among French MPs with some 1,600 amendments proposed.

The debate focuses mainly on new laws concerning work on Sunday, which would allow shops to open on 12 Sundays per year instead of five.

The 1,600 amendments to the bill are currently being reviewed by a special commission.

French railway company SNCF has announced it will axe 1,100 full-time jobs in 2015 as part of a reform designed to cut expenditure by €2 billion before 2017.

In total 1,600 positions will be shelved but 500 will open up in the “Réseau” branch of the company, which is responsible for maintaining and managing the rails.

The French trade union CGT has criticized the plans and will organize a day of protest on the 29th of January.

Smoke detectors to be made compulsory

In an attempt to decrease the number of fire victims, every home in France needs to be equipped with a smoke alarm as of March 8th 2015.

The devices need to conform to EU standards and should be installed in bedrooms as many fires happen while people are asleep.

According to French media, tenants should be wary of con artists that may show up at their door, claiming to be from the fire safety department or the town administration and trying to sell the devices at exorbitant prices.

In most cases, tenants aren’t required to buy a device at all as their landlords are supposed to provide them. All tenants need to do is take care of the installation and maintenance of the detector.

As for homeowners, buying an alarm should only set them back around €30.

Polluting cars to be banned on weekdays

A limited car zone could be set up as soon as this year and coloured stickers will classify cars and motorbikes according to their emissions.

The least environmental friendly vehicles will only run during weekends and public holidays and heavy goods vehicles and tourist buses could even be completely banned within Paris itself.

Seven-time champions Lyon are the new Ligue 1 leaders after comfortably defeating Toulouse 3-0 at the Stade Gerland on Sunday.

Frenchman Alexandre Lacazette extended his lead at the top of the scoringcharts with his 18th and 19th goals of the season while Nabil Fekir added further gloss to a perfect evening for Hubert Fournier's side as they lead the table in January for the first time since 2012.

In the weekend’s other matches, previous leaders Marseille slumped to a 2-1 defeat at Montpellier while champions Paris Saint-Germain threw away a 2-0 lead and were beaten 4-2 by Bastia in Corsica .

Those results left Lyon one point clear of Marseille with Saint-Etienne third, three adrift, and PSG surprisingly fourth and four points back.

The new building designed by Jean Nouvel will be officially opened by the Paris Orchestra, where world famous soloists such as pianist Hélène Grimaud or violinist Renaud Capuçon, will perform classics of the French music repertoire.

In addition to regular concerts and music exhibitions, the complex will welcome a 2,000 square metre educational centre as well as a ground-floor café and a panoramic view restaurant.

The two main wine bodies in the region, representing north and south Beaujolais, will part ways as the Organisme de Défense et de Gestion looks to focus on the success of its northern wines.

“It is a waste. It won’t achieve anything. The consequences of this split put Beaujolais wines’ success at risk”, Denis Chilliet, Union des vignerons du Beaujolais secretary-general told The Local.

No final decision has been taken so far. A first meeting took place last Thursday to organize the separation and the annual Beaujolais contest that was supposed to take place in early January, was cancelled by Denis Chilliet.