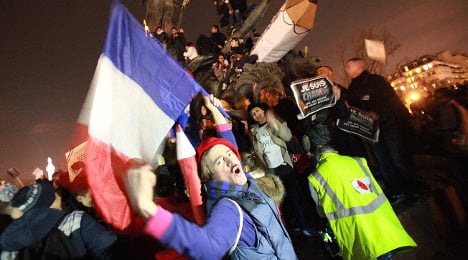 This phot was not taken after France won the World Cup but at a solidarity march after three days of terror attacks. Photo: AFP

It’s been a long time since the French felt good about themselves and their country.

But they deserve to on Monday morning.

There haven't been so many renditions of the Marseillaise sung on the streets of Paris by crowds filled with pride since the country lifted the World Cup in 1998.

Perhaps those polling agencies who regularly send out surveys concluding how pessimistic and depressed the French are, should send out their pollsters on the streets of Paris today, or to Lyon, Marseille or Rennes.

They may reach a slightly different conclusion.

What’s perhaps unfortunate is that it’s taken the bloodiest series terror attacks in the country’s recent history to restore the faith of the French in their country and in themselves.

As soon as the bullets began to fly on Wednesday France was plunged into yet more introspection.

TV debates and newspaper headlines were dominated by the seemingly age-old questions of the role Islam in France, how France had failed to integrate its immigrant population, how it had once again failed to protect its Jewish population and how Marine Le Pen and co will profit from it all.

While those questions undoubtedly remain, along with how France will deals with a much darker response to the attacks such as the dozens of anti-Muslim incidents and the wide us of the #JeSuisKouachi hashtag on Twitter, Sunday’s mass rallies will ensure that the authorities and the public will meet them with renewed vigour and confidence.

The country’s press has naturally heaped praise on the millions who had marched elbow to elbow with dignity, pencils aloft, even applauding police officers and without one single incident reported to police.

“We are a nation”, beamed Liberation newspaper, with its editor Laurent Joffrin saying: “The Republic had been hit in the heart, two days later the Republic rose up.” Le Parisien said the mass mobilisation of French people since the attacks was a “cry of hope”.

“The huge crowds are a wake-up call to make us aware of the errors and the problems in our society,” said Thierry Borsa.

With its front page headline “France stands up” Le Figaro newspaper saluted the courage and the dignity of the nation. “How could you not be moved by the spectacle of a nation finally united,” Le Figaro said.

And most people were, including the hundreds of foreign journalists who had made Paris their home since hearing news of the Charlie Hebdo shooting last Wednesday.

Even correspondents who have been here long term have talked about feeling like a Parisian for the first time.

“Terrorist attacks can have unintended effects,” wrote Simon Kuper in the Financial Times.

In general France doesn’t get much in the way of positive press from abroad, unless it’s from food and wine correspondents.

Sections of the Anglo press obsessively have predicting France’s downfall for years through its doomed economy, its unaffordable social welfare system, fissures in society all played out to the back drop of a rising far right National Front party destined to take over the Elysée at some point.

Again those questions still remain but perhaps the coverage of France’s struggles won’t be quite be as tinged with a hint of glee in future.

There may be a little more understanding for a nation which was rocked to its core by three of its own people, before it rose up as one in defiance.