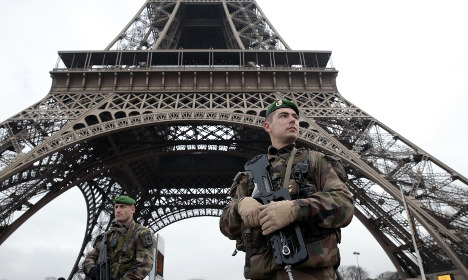 Soldiers at the Eiffel Tower. Photo: AFP
"We went to lunch on Friday and all the police were going past and the woman who was serving us was crying — we just sat eating our croque monsieurs in silence," said Kitty Wilcox, visiting as part of a large group of British art students.
They had arrived Thursday, a day after a massacre at the Charlie Hebdo office left 12 dead, to a country gripped by a manhunt for three killers that ended Friday in two violent hostage dramas in and around the capital.
"I spent half the day before crying and deciding whether to come. Quite a few people dropped out of the trip," said another of the students, Elizabeth Ranson.
"My mum was frantic but in the end it was fine and I'm glad we came."
A major terror drama will do little to help the French tourist board, currently in the midst of an action plan to boost visitor numbers to 100 million per year, up from 83 million in 2012.
At the Eiffel Tower, the crowds were thin on Saturday morning, although the wet weather seemed more to blame than fear.
"The atmosphere has been strange but with so many police around, we have felt safe," said Matt Gerhardt, 25, visiting from Germany with his girlfriend.
Staff at the foot of the tower said the crowds had been as huge as ever in the last couple days, and displayed a touching show of solidarity.
"Everyone took part in the minute's silence yesterday — tourists as well as staff," said Nicholas Michal, taking tickets.
"I was deeply moved."
Another tourist, from New Zealand, said the attacks were almost enough to make her reconsider her trip.
"I heard about it all while I was in Austria, and it made me very nervous," Theresa told The Local on Saturday.
"I come from a very safe country, and hearing about all this was horrible – especially as our hotel is just around the corner from where the hostages were taken."

Theresa from New Zealand. Photo: The Local
'What the hell'
For those working in the tourism sector, the impact of terrorist attacks is damaging but is unlikely to have long-lasting effects.
"The impact has been relatively limited for the moment — there's been no panic and if there isn't another attack, we should be fine," said Didier Arino, director of consultants Protourisme.
"We in the West have grown used to the fact we are no longer shielded from the risk of attacks, so the impact of these incidents is becoming less and less. The biggest impact is felt for visitors from further away such as Asians."
Indeed, one visitor from Paraguay, who stood admiring the Notre Dame cathedral on Saturday, said she already had concerns about visiting Europe
before arriving in the middle of this week's events.
"The Islamic radicalism in Europe is talked about a lot in my country so I was worried even before all this happened," said Isidora Johnson, a
25-year-old student.
"All my friends were messaging me when I got here, really worried. I sat in my hostel thinking I could be really scared and do nothing, but then decided 'what the hell'. I just kept my eyes really open and it was fine."
France's tourism action plan aims to present a friendlier face to the world.
Launching the initiative in June, then commerce minister Fleur Pellerin said France needed to "recover a sense of hospitality" after developing a
reputation for rudeness, and after a spate of attacks on tourists, including the robbery of 23 Chinese visitors in a restaurant in March 2013.
The ministry of tourism said Saturday they did not yet want to comment on how this week's events might affect the sector, saying "now was not the time".
Whether or not there is a long-term impact on tourism, for now Paris has the sympathy of the whole world.
"I was at the Arc de Triomphe last night and was looking up at the 'Paris est Charlie' sign on it," said Johnson, choking up slightly.
"It was really emotional."
Url copied to clipboard!