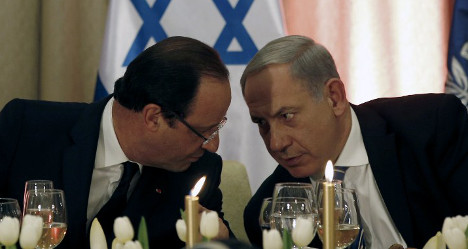 Israeli Prime Minister Benjamin Netanyahu Saturday told Jews in France, after 17 people were killed there in Islamist attacks, that Israel is their home and his government wants them to immigrate.

"To all the Jews of France, all the Jews of Europe, I would like to say that Israel is not just the place in whose direction you pray, the state of  Israel is your home," he said in a statement, referring to the Jewish practice of facing Jerusalem during prayer.

Four of the fatalities in France's three-day wave of violence were Jews killed in an attack on a kosher supermarket hours before the start of the Jewish Sabbath on Friday.

"This week, a special team of ministers will convene to advance steps to increase immigration from France and other countries in Europe that are suffering from terrible anti-Semitism.

"All Jews who want to immigrate to Israel will be welcomed here warmly and with open arms. We will help you in your absorption here in our state that is also your state," Netanyahu said in the statement.

He added that radical Islam was a threat to western civilisation, including the Jewish people.

"Unless the world comes to its senses, terror will continue to strike in other places," he added.

Netanyahu, accompanied by Foreign Minister Avigdor Lieberman, will join world leaders in Paris Sunday for a rally in tribute to the victims which is expected to draw more than a million people.

"We express our deep sorrow for our Jewish brothers who were murdered simply because they were Jews," he said.

"(To) our brothers and sisters in the Jewish community of France we share your pain at the awful loss," he added.

French Prime Minister Manuel Valls meanwhile sought to reassure his country's half-million strong Jewish community, saying during a visit to the Paris area where the supermarket siege took place that "France without the Jews of France is not France."

While Valls acknowledged worrying anti-Semitic trends, he said France was home to "the largest Jewish community in Europe and the oldest, which has contributed so much to the republic."

In November 2012 President François Hollande accused Netanyahu of hijacking a memorial service to the victims of a shooting at a Jewish school in March 2012 by Mohamed Merah.

"Netanyahu came to France to campaign and we knew that," Hollande told journalists in private remarks which were later leaked by satirical weekly Canard Enchainé.

Hollande said the Israeli prime minister, who had faces legislative polls a few months later had hijacked the event.

"Since I was there, he toned down his speech but it wasn't good to transform this ceremony into an electoral meeting," he told the journalists.

Netanyahu had compared the gunman to Nazis and warned that Israel could defend its people from those "who want to erase us from the map," ending his speech with the slogan "Israel will Live!"

Netanyahu had enjoyed close ties with Hollande's right-wing predecessor Nicolas Sarkozy until a G20 summit in November 2011  when Sarkozy branded the Israeli leader "a liar" in a private conversation with US President Barack Obama.

"I cannot bear Netanyahu, he's a liar," Sarkozy said, unaware that the microphones in their meeting room had been switched on.

Obama, according to the French interpreter, replied: "You're fed up with him but I have to deal with him even more than you."