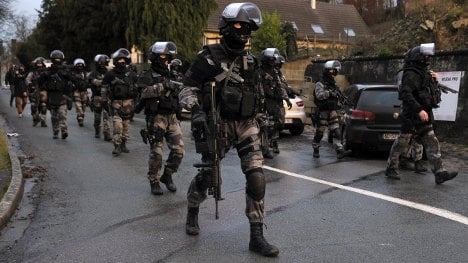 This may look like war, but it's not, argues Laurent Joffrin. Photo: AFP

Jewish leaders have also talked about a "war situation" after another anti-Semitic attack in France.

But for Laurent Joffrin, editor of Liberation, whose offices are now home to the surviving members of staff from Charlie Hebdo, it is up to the French people to battle terrorism and defend democracy, not the country's army.

Laurent Joffrin: A nation stands up Is it war? No. As terrible as it is, as bloody as it's been, terrorism is not war. It looks like it sometimes, of course. A bloody assault, a hostage taking, an arduous and bloody hunt, a brutal conclusion that ends with the death of the murderers and several hostages. Paris overrun by armed police vans, and the uninterrupted noise of sirens, deaths added to deaths, echoed infinitely via the countless loudspeakers of the live media…

With the attack on a Jewish shop the violence even took a sectarian twist and took us back to the horrors of the Merah case. Since Friday, France has entered a new era in its long fight against jihadist killers. They are no longer the murderers controlled remotely from abroad who struck us right in the heart, as in the 80's and 90’s, acting in the name of fairly distant Iranian or Algerian Islamists. These killers are the children of France. They are trained, brainwashed, turned into robots by activists connected to Iraqi or Syrian theatres of operation. But they were born here, they grew up here, they were radicalized here, and by striking at Charlie Hebdo, they committed a crime that connected to French life.

We understand the emotion of public opinion, which see cold-blooded attacks carried out one after the other, using weapons of war with absolute disregard for human life by young suicidal murderers that they could have seen growing up in their street or council estates.

The threat demands a much stronger solution from the police and the intelligence services. It must be organized, determined, multi-faceted. By flushing out the Charlie Hebdo murderers very quickly, the authorities have shown that they were not completely caught off-guard. But the number of young jihadists desiring to go at war in Syria or Iraq or who have already been there, is estimated to be 1,000, so we can see that the resources needed to meet this threat need strengthening.

And yet, terrorism is not war. Those who call for a state of emergency, who use warlike rhetoric, and are ready to demand exceptional laws, are strongly mistaken. The real war pits armies against each other, causing thousands of deaths, destroying cities and societies. Even if risks are still here, the attacks this week, until proven otherwise, were committed by a small and limited group that the police have located and neutralized very quickly.

France was already the target of a wave of attacks in the 80’s and 90’s. The bombs placed in department stores or on public transport and in the middle of crowds are as scary as the murders that we have experienced in the past few days. The population has always reacted with composure. The ordeal is tough – it’s terrible for victims and their families and terrifying for so many citizens. But the country has overcome the ordeal; it will do so this time too.

Suspending democratic procedures or altering them is playing the terrorist's game that aims at disseminating fear in everyone and harming the very meaning of democracy. The real answer is a political one. It is through the mobilization of the people, the republic, the society, through the mobilization of organisations, political parties, unions, the churches – to show terrorists that they back a useless cause. Facing a population that stands up against it, they have no chance.