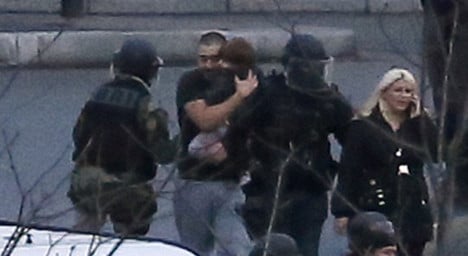 This father seen rushing from the scene of the Kosher store siege on Friday hid in a fridge for five hours. Photo: AFP

From the father who hid his toddler inside a supermarket refrigerator to the employee who texted tactical information to police from beneath a sink, authorities praised the quick instincts of survivors in the hostage incidents.

At the printing business northeast of Paris besieged by the brothers believed to have carried out the Charlie Hebdo massacre, one employee took refuge "under a sink in the canteen" upstairs, Paris prosecutor Francois Molins told reporters.

The employee — a 26-year-old graphic designer named Lilian, according to a source close to the investigation — was "terrified", Molin said.

But, overcoming his fear as he remained undetected, he began communicating with police outside via text message, sending them "tactical elements such as his location inside the premises," a source said.

He could hear the suspects talking, which both helped reassure him and gave him more information to send to the forces poised outside, the source said.

The brothers — identified as Cherif and Said Kouachi, who had been on the run since they are believed to have slaughtered 12 people at the weekly magazine's offices in Paris on Wednesday — had been cornered there after a firefight with police which Molins said left Said with a minor neck wound.

They had a hefty cache of arms including Molotov cocktails and a loaded rocket-launcher.

The brothers had taken the store manager hostage, but later released him after he helped Said with his wound as the second man hid upstairs, said Molins.

Another source said the hidden employee was also able to communicate with a family member via text.

'I shook his hand'

Earlier Didier the salesman, a humdrum meeting with a client at the printing business turned into a run-in with France's most wanted men as he "shook hands" with one of the magazine massacre suspects.

The salesman told France Inter radio how he came face-to-face with one of the suspects holed up in the small CTD office in Dammartin-en-Goele.

"When I arrived my client came out with an armed man who said he was from the police. My client told me to leave so I left," Didier said, identifying the man he was to meet with as Michel.

"I was in front of the door. I shook Michel's hand and I shook the hand of one of the terrorists."

He said the black-clad man who was wearing a bullet-proof vest and carrying what looked like a Kalashnikov rifle told him: "'Leave, we don't kill civilians anyhow'. That really struck me, so I decided to call the police. I guess it was one of the terrorists."

"It could have been a policeman if he hadn't told me 'we don't kill civilians'. They were heavily armed like elite police."

"I think I am going to go and see my colleagues and play the lottery because I was very lucky this morning." Some 40 kilometres away, shortly before 1:00 pm, a father called Ilan and his three-year-old son were at a kosher supermarket in Vincennes when Amedy Coulibaly, believed to be an ally of the Kouachi brothers, burst into the store and pulled out a Kalashnikov.

At least three other people were with them, according to sources close to the investigation.

Ilan, in his thirties, quickly removed his jacket and wrapped his son in it to protect the toddler from the frigid temperatures. Hidden in the cold, they and the other hostages remained in the refrigerator for nearly five hours.

Meanwhile, Ilan's mother realised quickly that her son and grandson were hidden and decided not to try to contact them, even by text.

Instead she gave Ilan's mobile phone number to law enforcement, who were able to use it to track the location of the man, his son and the other hostages inside the store.

This knowledge, according to the prosecutor, may have contributed to their survival when police finally stormed the store and killed Coulibaly.

'I hid behind a table and he didn't see me'

When a masked gunman burst into the Charlie Hebdo editorial meeting on Wednesday shouting "Allahu akbar" and fired off a hail of bullets, journalist Laurent Leger threw himself behind a corner table and hid as horror unfolded around him.

As we know now the journalists were wrapping up their weekly meeting when they heard what sounded like "fireworks" outside, said Leger, whose reflex to hide would make him one of few survivors of the bloodbath.

He looked like a member of the special forces, "he was masked, dressed all in black, he was holding his weapon with both hands," Leger told France Info radio.

"And then the shooting started, the smell of gunpowder… by chance I threw myself behind the table and he didn't see me … a few seconds, and everyone was on the ground," he said, adding the gunman had shot at random.

Helpless, the veteran reporter huddled tightly in his hiding place.

"I saw the others on the ground, the sound of explosions, then suddenly there was silence. A long silence."