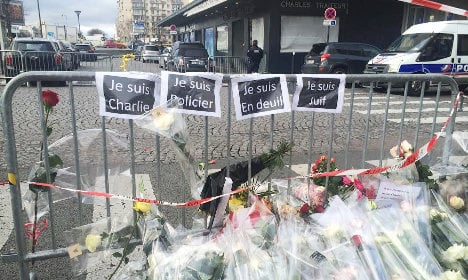 Parisians leave flowers at the scene of the second hostage drama. Photo: The Local
It's a grey day in Paris.
Camera crews flock around the Hyper Cacher supermarket to the east of the city, the scene of Friday's hostage drama that saw one terrorist and four hostages killed.
The area is cordoned off and guarded by police. Across the road, television crews focus on the windows and doors of the supermarket which are still riddled with bullet holes. On the other side of the police tape, Parisians leave flowers and candles in memory of the fallen.
“This has truly been a nightmare – the French people can hardly believe it,” says Philippe, a communications worker.

Philippe says he won't miss the next copy of Charlie Hebdo. Photo: The Local
He said that he would “of course” be joining the march on Sunday, where one million people are expected to show their solidarity, including world and community leaders.
“But I think it's important to add for your international readers that Paris is a safe city. It's beautiful. Look, it's 14 degrees today in the middle of winter,” he said, pointing to a billboard displaying the weather and the words “Nous sommes tous Charlie”.
“An attack like this one hasn't happened for 20 years.”
Others aren't so optimistic. Kevin, a student, said he wouldn't be attending the march.
“I think there's a definite risk – we have no idea what could happen,” he says. “Many people think the attacks could continue – I've read that there are 5,000 people on the terrorist black list from the US. Anything could happen with so many people gathered in the one place.”

Kevin will not join the solidarity march. Photo:The Local
A tourist from New Zealand said the attacks were almost enough to make her reconsider her trip.
“I heard about it all while I was in Austria, and it made me very nervous,” explains Theresa. “I come from a very safe country, and hearing about all this was horrible – especially as our hotel is just around the corner from where the hostages were taken.”
But on Saturday, the scene of the previous day's hostage drama in Porte de Vincennes is much calmer.
Curious bystanders mingled with the press near the Jewish supermarket, some to pay respects, others to look on. Not far from the police barrier, a woman was weeping uncontrollably as she was consoled by her family.
A German psychology student, who has been on exchange in Paris for the last six months, was among the onlookers. The 23-year-old, who preferred not to be named, said he would be marching with the throngs on Sunday.
“What happened was so unreal that it just didn't fit in to the city,” he said, shaking his head in disbelief.
“I'll be there. I think it's important to show that you're not afraid and that you stand up for your values. It would just be a sign of retreat if everyone stayed home locked up,” he tells The Local.
He adds that his workplace has ramped up security since the first attack, with workers needing to show their passports just to enter the office.
“You can tell there's a degree of anxiety and fear at the control points, but I don't notice it among the French people.”
Daniel Racoceanu, a professor at the University of Sorbonne, will also march on Sunday. He says France's next moves will be imperative.
“This is about the freedom that we believe in. This wasn't a random terror attack. Targeting journalists is hitting France where we are most critical. Journalists are the spinal cord of our belief and personality,” he explains.
He adds that France can expect more attacks, and that he wouldn't be surprised if a Jewish school, cafe, or even monument turned out to be the next target.

Daniel will be marching on Sunday. Photo: The Local
“And I think France should take it more seriously. We are a bit weak, we don't have cameras everywhere like they do in places like Singapore. And Singapore is managing well, so why can't we? We need to take care of these potentially dangerous people. There are people walking free who are blacklisted by the US. It's unacceptable.”
Other Parisians feel that the attacks were a long time coming.
“Unfortunately, I'm not surprised. You can smell it in the air, we have felt it for a long time,” says Thomas, a 41-year-old who has retired from the military.
“We know it can happen and we know people want to strike at France. We saw it two years ago in Toulouse,” he adds, referring to gun attacks targeting French soldiers and Jewish citizens, which left seven dead.
“I won't march tomorrow, I have other things to do, but I will be there mentally. But I feel that things are safe now, at least for a while, and people aren't afraid. I don't know what will happen in the future, though, maybe in a month's time something will happen again.”

A billboard reads “We are all Charlie”, a slogan that has taken off around the world. Photo: The Local
Url copied to clipboard!