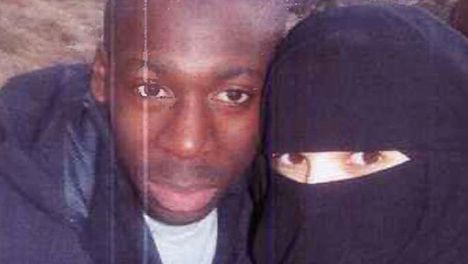 A woman, believed to be Hayat Boumeddiene, pictured with terrorist Amedy Coulibaly.

Coulibaly was killed on Friday after taking hostages at a Paris kosher supermarket. He told TV reporters during the siege that he had was a member of the Islamic State (Isis) terror group. The day before, he killed a policewoman in the Paris suburb or Montrouge together with an accomplice, said by police at the time to be thought to be Boumeddiene.

PROFILE: THE MOST WANTED WOMAN IN FRANCE

Video footage of her at the airport has been seen by authorities, the source said.

Le Figaro also reports that Turkish authorities saw a woman fitting Boumeddiene’s description crossing the border from Turkey to Syria on Thursday – the day her boyfriend killed a policewoman in Paris.