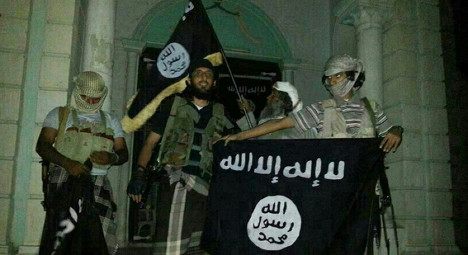 A picture taken with a mobile phone early on May 24, 2014 shows Al-Qaeda militants posing with Al-Qaeda flags in front of a museum in Seiyun, second Yemeni city. Photo: AFP

A top sharia official from Al-Qaeda in the Arabian Peninsula (AQAP) threatened France with fresh attacks following those at the Charlie Hebdo magazine and at a Jewish supermarket, SITE monitoring group said Friday.

"It is better for you to stop your aggression against the Muslims, so perhaps you will live safely. If you refuse but to wage war, then wait for the glad tiding," Harith al-Nadhari was quoted saying in a video.

He stopped short of claiming responsibility for the three days of Islamist bloodshed in France that left 17 people dead.

But one of the suspects in the Charlie Hebdo attack studied in Yemen, where he attended Al-Qaeda training camps, Yemeni security sources and a classmate have said.

"Some of the sons of France were disrespectful to the prophets of Allah, so a group from among the believing soldiers of Allah marched unto them, then they taught them respect and the limit of the freedom of expression," the AQAP official says.

French elite forces stormed two hostage sites Friday, killing the brothers behind the Charlie Hebdo massacre and a jihadist accomplice in a fiery end that also claimed the lives of four hostages at the city center supermarket.

The gunmen at both sieges told French TV they were acting together in the name of al-Qaeda in Yemen and the Islamic State group.

Supermarket gunman Amedy Coulibaly told French TV he was a member of the Islamic State extremist group and had coordinated his atrocities with one of the Charlie Hebdo gunmen, Cherif Kouachi, who told television he was backed and financed by al-Qaeda in Yemen.

Links between US-Yemeni cleric and brothers

The specter of late terror suspect Anwar al-Awlaki looms over the Charlie Hebdo massacre after evidence emerged of links between the US-Yemeni cleric and the two brothers blamed for the killings.

Cherif Kouachi, who died with his brother Said in a bloody end to the drama in France on Friday, said a trip he made to Yemen in 2011 was financed by Awlaki, who was killed by a US drone the same year.

Kouachi made the claim to French media just hours before his death.

Separately, The Washington Post cited a Yemeni official as saying Said Kouachi had met Awlaki in 2011.

The apparent involvement of Awlaki in the mentoring of the Kouachis provided further insight into the influence of the firebrand militant, once placed in the same bracket as Osama bin Laden by anxious US authorities.

Hollande – 'the threat is not over'

The threats from Al Qaeda came just hours after Hollande took to live TV to warn the nation that although France "faced down" the extremist attacks over the last three days, the country still faced more threats.

Speaking in a televised address shortly after commandos killed the three gunmen responsible for the wave of terror, Hollande hailed the "courage" of French security forces — but said France "has not finished with the threats targeting it".

Valls said of this week's violence: "There will be a before and an after of what happened."