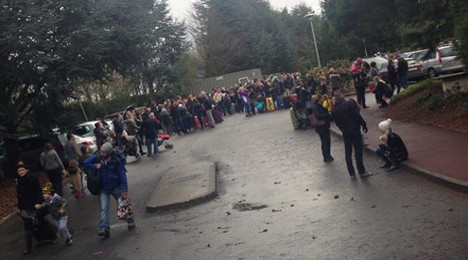 Visitors to Disneyland were evacuated after a security alert which proved to be a false alarm. Photo @Andreknulst/twitter

Reports in the French media on Saturday said the Disneyland theme park to the east of Paris was being evacuated over a security alert.

Le Parisien reported that armed police were being sent to the scene with some staying at the park's hotels reporting that they had been asked to stay in their rooms.

Currently being asked to stay in our rooms and there are armed police everywhere. Any news? #DisneylandParis

It is not clear what has caused the security alert, with some rumours going around Twitter that police were hunting a reported gunman in of the hotels, although we have had not official confirmation of this.

France TV info have since reported that it may be a false alarm at the park. That appears to be the case with guests reporting they were then free to leave their rooms.

@TiPitch @elske40 free to leave our rooms now. Was told something happened in one of the rooms but no more info #DisneylandParis

The alert comes after three days of terrorist attacks that have left Paris and France as a whole on edge and in fear of further violence.

During that time there has been a series of false alarms, whether on public transport or at sites like the Trocadero, which was evacuated after false rumours that a gunman was on the loose.

The government announced on Saturday that an extra 500 soldiers would patrol the streets of Paris on Saturday.