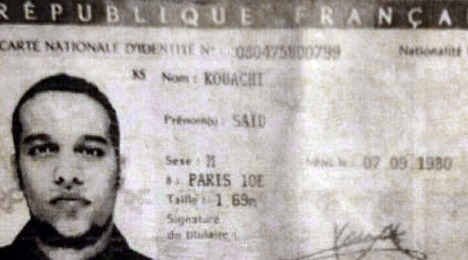 Finding extremists is easy. What's nearly impossible, intelligence sources say, is tracking every move of all of them, all the time.

"It is not because you are known that you are permanently under surveillance," said Eric Denece, director of the French Centre for Intelligence Research.

On Wednesday, Cherif Kouachi, 32, is believed to have carried out the attack on Charlie Hebdo's offices in Paris with his older brother Said, 34.

Cherif has already been jailed for his role in sending fighters to Iraq, and his name cropped up in a failed attempt to break militant Smain Ait Ali Belkacem out of prison in 2010.

So how does a man with a dubious jihadist past who was known to the intelligence services procure a Kalashnikov and execute a bloody attack on a place already under police protection because of previous threats?

A similar question cropped up in what until now had been France's most jarring recent attack, when Al-Qaeda militant Mohamed Merah murdered seven people in a series of 2012 attacks, including three Jewish children and three soldiers.

He was a known radical Islamist with 15 criminal convictions and had travelled to Pakistan and Afghanistan for training.

But Denece said the authorities simply couldn't watch all suspects all the time.

"At some point surveillance comes to an end, especially if you are smart enough to watch your step for a while. These are inevitable holes in the net," he said.

On Thursday morning Prime Minister Manuel Valls said that while "these individuals were most likely being monitored, there is no such thing as zero risk" when it comes to the threat of an attack.

Interior Minister Bernard Cazeneuve confirmed that the suspects had been "under surveillance" but that there was "no element indicating an attack was imminent".

A police source confirmed to AFP that Cherif had not travelled abroad recently and the brothers were not being monitored "as targets who could move into action".

A massive new pool of potential jihadists has been created by the stream of French citizens going to fight alongside Islamic State jihadists in Iraq and Syria. Police trying to track those who leave and those who return, battle-hardened and radicalized, are inundated.

"Of course we don't have the means to put all these people under permanent surveillance," a French official working in the anti-terrorist sector told AFP on condition of anonymity.

"So what we do is make lists. Those who appear the most dangerous, the most likely to move into action, are under permanent surveillance. The others, less so, depending on the resources," the official said.

"The list is constantly evolving, some climb, others go down. The knack is to have the right names in the right place and that is not easy."

Another expert in the field, also speaking on condition of anonymity, said: "Monitoring one suspect 24/7 who is often using three or four different cellphones, that means 30 cops. What do you do? The only option is a list of priorities."

French officials, on high alert after threats from the Islamic State group against the country and its citizens, regularly say many potential attacks have been thwarted and terrorist networks dismantled.

"Several terrorist attacks had been foiled in recent weeks," Hollande said on Wednesday after the attack on Charlie Hebdo.

But the threat is many-headed, featuring amateur jihadists, hardened fighters and everything between.

"To monitor everything you need a massive increase in police numbers… This wouldn't necessarily be effective, investigators would be overwhelmed," Denece said.