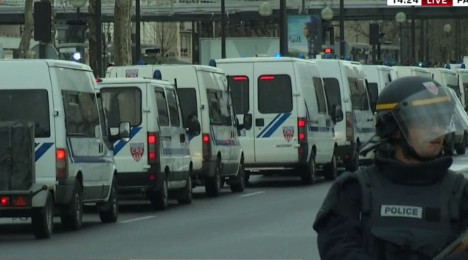 Follow our live blog for updates on the ongoing hostage crises in Dammartin-en-Goële and Porte de Vincennes.

"There are at least two dead, maybe more, but for the moment we don't know," one source said.

French officials suspect a man responsible for the murder of a policewoman on the southern outskirts of Paris on Thursday could be the hostage-taker.

Police cordoned off the area, nearby schools were evacuated and the vital Paris ringroad which runs close to the scene was blocked.

The bloody drama erupted just as heavily armed elite police began a siege in a small town outside of Paris where two suspected jihadists behind Wednesday's massacre of 12 people at the Charlie Hebdo magazine had themselves seized a hostage.

A security source told AFP that the man believed to be holding the Jewish store and the suspected Charlie Hebdo killers holed up in Dammartin-en-Goele know each other.

However, there was no concrete information about whether the two incidents — which have plunged France into its greatest security crisis for decades — were coordinated.

Police released mugshots of the gunman in the supermarket and also of a woman, saying both were "armed and dangerous." They were named as Amedy Coulibaly, 32, and Hayat Boumeddiene, 26.

Coulibaly is believed to have links to Cherif Kouachi, also 32, one of the Charlie Hebdo killers.

Kouachi and Coulibaly were seen together in 2010 while visiting another jihadist Djamel Beghal, mastermind of a failed prison break-out plot.

The man they were trying to break out was Algerian Islamist Smain Ait Ali Belkacem, who was sentenced to life imprisonment in 2002 for a bombing at the Musée d'Orsay metro station in Paris in October 1995 that left around 30 injured.

News of Friday's terrifying emergency spread rapidly through the neighbourhood as elite police in black took positions and cordoned off a large area around the hostage site.

"We were at home. I had to return to school at 2:00 pm but couldn't. We got there but couldn't get in because the CRS (special police) had taped it off," Louis Copans, 16, said.

He said other classmates who had remained in school were not able to leave.