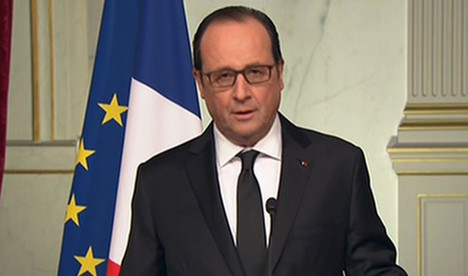 François Hollande says the threat is not over for France. Photo: screengrab/BFMTV

Speaking in a televised address shortly after commandos killed the threegunmen responsible for the wave of terror, Hollande hailed the "courage" of French security forces — but said France "has not finished with the threats targeting it".

Valls said of this week's violence: "There will be a before and an after ofwhat happened."

Paris has been on its highest state of alert since Wednesday when two ofthe gunmen stormed the offices of the Charlie Hebdo satirical newspaper, killing 12 people.

Fears of a jihadist campaign took hold the next day when a policewoman in asouthern Paris district was murdered in the street by a third gunmen.

On Friday, events came to a climax with two hostage-takings, in Paris andin a town to the northeast by the Islamist gunmen. French commandos simultaneously stormed both sites, killing the men.

Hollande said "these fanatics have nothing to do with the Muslim religion"– a message aimed at preventing a backlash against France's Muslim community, Europe's biggest, which is estimated at over four million.

He called the hostage-taking in Paris, which took place in a Jewishsupermarket in the capital's east, "an appalling anti-Semitic act". More than a dozen people held by the gunman were freed after the commando raid, but four others died.

He also called for public vigilance and unity.

The horrific wave of violence elicited statements of sympathy and supportfor France from around the world. On Sunday, a mass rally to honour the dead and condemn the week's violence is planned in Paris. Hollande said he would attend the rally, together with several foreign leaders, including the leaders of Germany, Britain, Spain and Italy.

Valls, meanwhile, vowed the government would investigate the events of theweek to answer several "legitimate" questions. Among them how the gunmen — who were known to the police, and two of whom were on a US no-fly list — could mount such operations.

"We owe a duty of truth to the victims, to their families, and to ourcompatriots," he said.