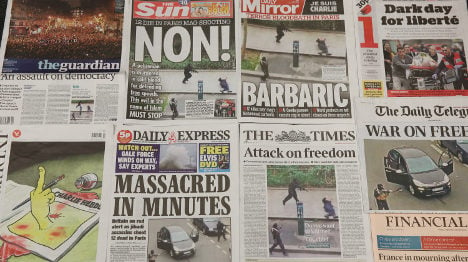 The massacre at the offices of the Charlie Hebdo in Paris on Wednesday sparked widespread condemnation, with numerous media outlets expressing their support for the magazine, notorious for republishing cartoons of the prophet Mohammed.

In Denmark, where global protests were triggered by the publishing of cartoons of the Prophet Mohammed in 2005 – later reprinted by Charlie Hebdo in 2006 – newspapers presented a united front in solidarity with the magazine.

Politiken and Berlingkse both ran front page drawings, with the left-leaning Politiken showing a broken pencil continuing to draw and the right-leaning Berlingske depicting an issue of Charlie Hebdo riddled with bullet holes.

Jyllands-Posten, which published the Mohammed cartoon in 2005, had a pure black cover with a quote on “the free world’s united project to protect our democratic society”.

On Wednesday the editor behind those publications said Charlie Hebdo had "paid the highest price" for defending press freedom.

Meanwhile in Italy the attack was also strongly condemned with broadsheet Corriere della Sera carrying the headline: “Attack on freedom. Everyone's” and broadsheet Il Messaggero with “Islamic massacre against freedom”.

By far the most controversial front page in Italy was that of centre-right daily Libero, which bore the headline: “This is Islam” above a photo of the police officer being shot at point-blank range by one of the attackers. Another right-wing daily, Il Giornale, published a Mohammed cartoon from the French magazine on its front page with the caption “They killed them for these cartoons”.

In Germany some of the country’s main newspapers including Berliner Kurier, Berliner Zeitung and Tagesspiegel reprinted cartoons of the prophet Mohammed from the French magazine. Berliner Kurier used a full-page cartoon with the caption: “No! You can’t kill out freedom.”

German tabloid Bild carried the headline: “Cowardly murderers!” with a photo of one of the policemen getting shot.

Titanic, the German equivalent of Charlie Hebdo, hit back with a joke front page suggesting Muslims have smaller penises.

The satirical magazine's homepage cartoon promises a study in comparative religion, illustrated with four phalluses – punning on the gag that "the pen is mightier than the sword." And Spanish satirical magazine El Jueves published an editorial entitled "Bad time for humour", with a cartoon of an ink bottle spilling blood. In the UK the Independent newspaper carried a cartoon on its front page of a hand emerging from a bloody copy of Charlie Hebdo pointing the middle finger. While The Times decried as "Attack on Freedom" and the Daily Telegraph a "War on Freedom".

Back in France, meanwhile, the media erupted in fury at the massacre of their colleagues, with the daily Liberation running the headline “We are all Charlie” – a line repeated in many other papers and echoed online with the hashtag #JeSuisCharlie.

Business daily Les Echos urged people to face up to "barbarism", publishing the last cartoon written by one of those killed in the attack.

"The hooded bastards declared war on France, on our democracy, on our values," the paper said in an editorial.

The front page of Paris-based tabloid Le Parisien was dominated by the headline: "They won't kill freedom" above a photo of protesters holding placards reading "I am Charlie".