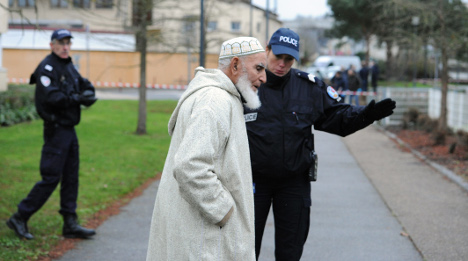 A policeman directs a man away from a mosque in Le Mans where shots were fired and three blank grenades were thrown. Photo: Jean-Francois Monier/AFP

Three blank grenades were thrown at a mosque shortly after midnight in the city of Le Mans, west of Paris. A bullet hole was also found in a window of the mosque.

In the Port-la-Nouvelle district near Narbonne in southern France, several shots were fired in the direction of a Muslim prayer hall shortly after evening prayers. The hall was empty, the local prosecutor said.

An explosion at a kebab shop near a mosque in the eastern French town of Villefranche-sur-Saone on Thursday morning also left no casualties. Local prosecutors have described it as a "criminal act".

France is on edge following the deadly assault by heavily armed gunmen on satirical magazine Charlie Hebdo on Wednesday that left 12 dead. No link has yet been established between the attacks.

Meanwhile on Thursday France's main Islamic groups urged Muslims across the country to observe a minute of silence on Thursday and for imams to condemn terrorism in the wake of the massacre.

The groups called on "Muslim citizens of France to observe a minute of silence today at midday (1100 GMT), along with the rest of the nation, in memory of the victims of terrorism."

The appeal — issued by Muslim assemblies from across France — also called on imams at Friday prayers to "condemn the violence and the terrorism with maximum firmness."

Muslim citizens were also asked to join "in massive numbers" a national day of solidarity on Sunday where demonstrators are expected to take to the streets of towns across France.

Police were frantically hunting two men who fled Paris on Wednesday after gunning down 12 people in an attack on Charlie Hebdo, apparently in retaliation for the magazine's defiant stance in publishing cartoons they deemed offensive to Islam.